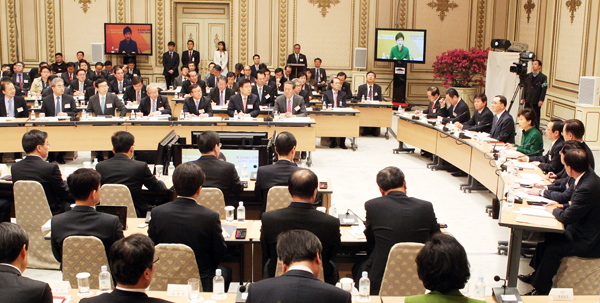 President Park Geun-hye presides over a discussion on deregulation with about 140 government officials and businesspeople yesterday in the Blue House. For the first time, the forum was aired live nationwide. By Byun Sun-goo

To show its seriousness about rooting out unnecessary regulation in the business sector, the government yesterday held its first-ever public discussion forum, presided over by President Park Geun-hye and joined by 140 ministers, government officials, entrepreneurs and experts.

The open discussion to “fight regulations” was the first of its kind. Televised live on state-run cable TV network KTV, the forum was divided into two sessions, beginning at 2 p.m. and lasting until late in the evening - well beyond the scheduled closing hour of 6 p.m.

The first part was devoted to raising issues about regulations and the second to how to get rid of red tape.

It was the centerpiece of the Park administration’s drive to reinvigorate Asia’s fourth-largest economy under a three-year economic innovation plan.

Throughout the forum, speakers from various sectors posed problems and explained their own difficulties. Attending from the business sector were leaders of large corporations such as Park Yong-maan, chairman of Doosan Group and the Korea Chamber of Commerce and Industry, and Lee Seung-cheol, vice chairman and chief executive of the Federation of Korean Industries. Also attending were a venture capitalist, film director, private equity fund operator and even a galbi (Korean barbecue) restaurant owner.

A ministerial meeting on regulatory reform had originally been set for Monday but was postponed at the last minute after the president objected to only a handful of businesspeople attending. That led to the expansion of the forum to include entrepreneurs from both big and small companies.

The forum limited speeches to three minutes per person, even though many participants went over. President Park interposed at random, asking questions and at times reprimanding government officials.

“The reason I prioritize deregulation more than anything else is because it is directly linked to job creation,” she said in an opening address. “When there is an absolute dearth of jobs, the problems of women’s careers being ruined [due to marriage or childbirth] and youth unemployment will never be fundamentally resolved.”

Virtually every past administration has claimed to want to deregulate the Korean economy, but there are still a lot of regulations that only exist in Korea, and regulations that span different government institutions, Park continued.

She cited an example of unnecessary regulations for Chinese shoppers that visited Internet shopping sites to buy clothes and fashion items featured in a recently aired Korean TV show. They couldn’t buy anything because the sites required certain certificates for payment. Park was apparently referring to the SBS show “My Love From the Star.”

“A certificate that only Korea demands is an impediment for Korean shopping malls to get orders from overseas,” the president said. “The government cannot do everything for deregulation, and the various sectors and social brackets should come up with new and creative investments and challenges.”

The government last year designated 397 regulations that look minor but are hugely burdensome for smaller business operators - they are described as “a thorn under the nail” - with the aim of lifting them. But 92 have yet to be resolved, the president pointed out.

“A lot of time has passed, and if those problems have not been resolved, I think it is a huge problem,” she said in a stern voice. “Related government institutions should take responsibility.”

One issue that led to a lengthy discussion was food trucks. Bae Young-gi, chief executive of Doorione Food and Franchise, a food-truck manufacturer, said even though food trucks could create many job opportunities for younger entrepreneurs struggling to find work, the business is currently illegal.

He asked the government to lift a ban on converting ordinary trucks into food trucks. Bae explained that food trucks are an estimated 1 trillion won ($929 million) industry in the United States and some 80 percent of people in the business are in their 20s.

Suh Seoung-hwan, minister of land, infrastructure and transport, responded by saying that the government would consider easing the regulations.