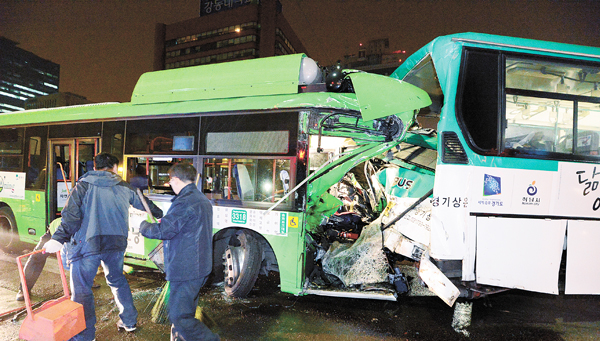 Songpa District Office officials clear the scene Wednesday night after a bus collided with another bus at 11:45 p.m., killing a driver and a passenger. [NEWS1]

A bus driver rammed into a series of vehicles Wednesday night at two different intersections in southern Seoul, killing himself, a student riding in the back seat of a bus he rear-ended and injuring 17 people.

The 60-year-old driver, identified only by the surname Yeom, was conscious throughout the high-speed race on a 1.2-kilometer (0.74-mile) stretch of southern Seoul. Passengers on his bus tried to stop him, but he just repeating the word “uh” and continued driving.

Police couldn’t say whether the driver was homicidal, suicidal or had suffered a mental breakdown. He had worked as a bus driver for 20 years, was found to be perfectly healthy in a physical exam in October and completed a full marathon last weekend.

Yeom and one passenger of the bus he rear-ended were pronounced dead at a nearby hospital. The passenger was a college freshman returning home from a school orientation. A classmate sitting beside him in the back of the butted bus was in critical condition yesterday, and doctors said her recovery is unlikely. As of last night, her family had decided to take her off life support and donate her organs. Sixteen passengers of the two buses, including another classmate of the college freshmen, sustained lighter injuries.

Police are having difficulty figuring out the tragedy because the black box on Yeom’s bus, which would have recorded video footage during the incident, was destroyed in the final accident. The strange turn of events began when Yeom’s bus collided with three taxis at the Seokchon Lake intersection in southeastern Seoul. Yeom continued driving to the Jamsil intersection and turned right, deviating from the No. 3318 bus route.

He then drove to the Songpa District Office intersection and sideswiped four vehicles before slamming into the rear of a No. 30-1 bus with the students sitting in the rear seat.

He was killed in that collision.

“Yeom did not perform defensive driving in the least,” said Yoon Byeong-hyeon, chief of traffic division of Songpa Police Precinct, in a briefing held yesterday. “So we are suspecting he may have not been in a normal condition to drive.”

Yeom’s family told police he was healthy enough to run a full marathon last weekend and that a medical checkup last October found nothing wrong. The police said they will conduct an autopsy to see if there were any organic disorders. The authorities didn’t rule out the possibility that the bus had defects such as malfunctioning brakes because Yeom did not try to stop the bus after the first accident.

The bus company said malfunctioning of the brakes was unlikely because no defects were found in a regular inspection on Tuesday. The black box is expected to be restored by the National Forensic Service.