Auctions are where the action is

Auctions are where the action is 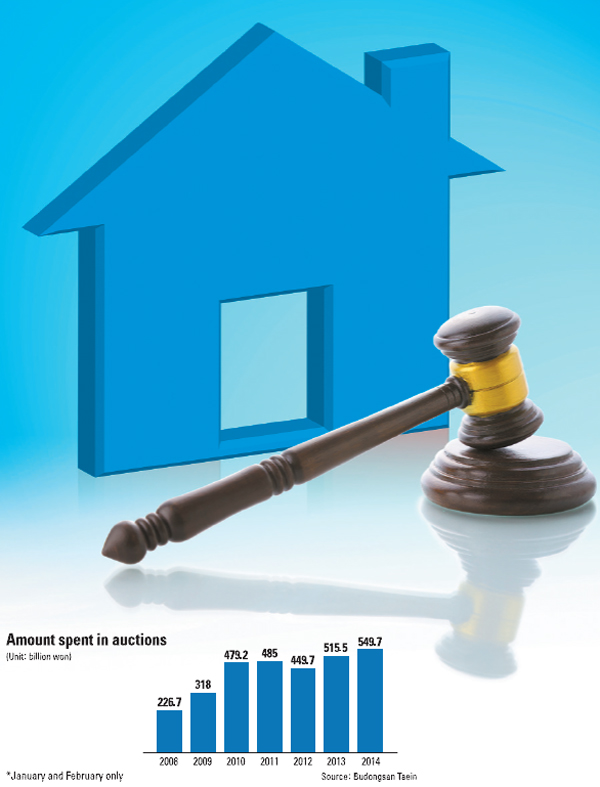 The real estate auction market has been heating up since the beginning of the year, especially in the greater Seoul area, as more and more potential buyers try to purchase homes below the asking price.

This development is driven by recent activity in the housing market that has sent home prices higher.

According to Budongsan Taein, which specializes in real estate auctions, in the first two months of this year, a total of 549.7 billion ($508 million) won was spent during apartment auctions in greater Seoul. This is not only a 6.6 percent increase from the 515.5 billion won recorded in January and February 2013, it is the largest amount ever spent on buying housing units up for auction in the first two months of the year.

Budongsan Taein says that when the figure for March is included, the total amount spent in auctions will be a record for the first quarter.

In the first two months, more than 15,000 people submitted bids at court, representing a surge of 43 percent compared to the same period last year.

So far this year, 71 apartments have been auctioned without a single postponement. This compares to the 24 that were auctioned immediately after being put up for sale during the same period last year.

Typically, auctioned property fetches about 80 percent of its assessed value. If there are no bidders at the first offering, the sale price drops to 64 percent of its value in the next round of bidding.

As a result, the auctioned price averaged 83.6 percent of assessed valuation in greater Seoul in January and February, 8.6 percentage points higher than the same period last year.

And the auctioned price to assessed value ratio is the highest in four years.

For instance, a 42-square-meter (452-square-foot) apartment in Gaepo-dong, southern Seoul, was auctioned for 712 million won last month, 12 million won more than the assessed value. Gaepo-dong is one of the popular neighborhoods in Gangnam and is poised for major redevelopment.

An 84-square-meter apartment in Hwaseong, Gyeonggi, assessed at 220 million won was auctioned for 245 million won.

Such a trend is not limited to small or midsize apartments, as was the case when the real estate market was in the doldrums. Interest in apartments 85 square meters and larger has even been growing.

“Apartments that were auctioned recently were ones whose values were assessed last May and June, before the real estate market started to pick up earlier this year,” said Park Jong-bo, a researcher at Budongsan Taein. “This seems to have attracted a lot of bidders who think the assessed prices were low.”

The rising popularity of auctions is affecting the overall real estate market as well. According to Budongsan 114, a real estate information consulting company, the apartment values in Seoul saw growth of 0.06 percent last week, half the rate reported a week earlier.

Not only were apartment prices affected by the start of the school year, which normally drives down prices and reduces the number of transactions, the rising popularity of auctions contributed to the slower growth.

“Demand for apartment purchases has fallen as there are apartments put up for bids at are much lower prices than those that are up for sale,” said Kim Eun-seon, a researcher at Budongsan 114.

But experts advise bidders against making hasty moves, cautioning that when bidding for a housing unit up for auction, they should carefully monitor the market.

Because the property market has not fully recovered, there are several cases where bidders end up paying more than the asking price of the same houses that are placed on urgent sale.

“Recently, some sellers find their apartments’ jeonse [two-year lease contract] payments and the mortgage exceed the actual value of the home,” said Yang Hyeon-jin, an executive at Story Auction, a company specializing in real estate auctions. “In such cases, the best thing to do is get help from a professional.” 