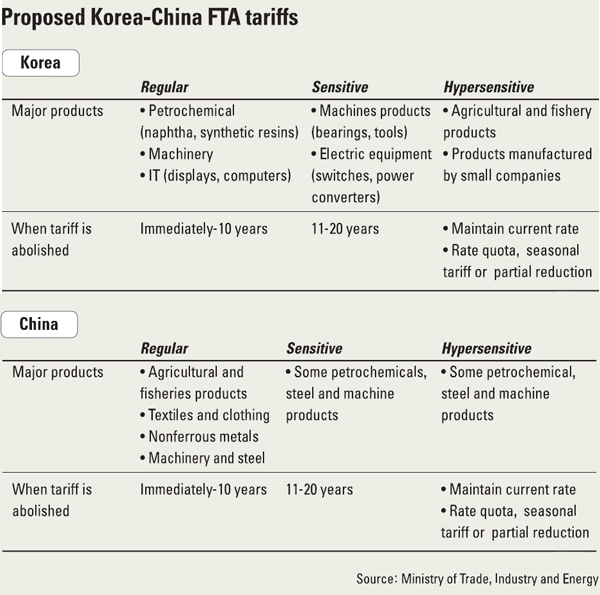 The 10th round of free trade agreement negotiations between Korea and China ended after five days and little progress, with both countries trying to protect vulnerable industries against cheap foreign products.

During the sessions in Ilsan, Gyeonggi, the two countries’ differences mainly revolved around products produced by industries that could lose competitiveness in terms of price or quality.

China is the No. 1 trade partner of Korea, both in exports and imports, recording $229 billion last year. Korea exported $146 billion to China, up 2.1 percent compared to 2012, and imported goods worth $83 billion.

Chinese officials reportedly were reluctant to open the market immediately for petrochemicals and other heavy industry products, Korea’s main trade strength, saying Beijing has seen a continuous drop in the trade balance.

China also asked Korea to maintain current tariffs for petrochemical, steel and machinery products because opening its market too quickly could severely damage its heavy industries.

At the same time, Korea pushed China to expedite the removal of tariffs on value-added products such as petrochemicals, steel, machinery and displays.

Regarding hypersensitive trade products, abot 10 percent of total industrial products traded, negotiators from both sides proposed alternatives other than total exemptions from tariffs.

They include setting a quota, which would impose the current tariff rate only when a partner imports more than a specified amount; seasonal rates on agricultural products; and slowing the rate of reductions.

The two countries also discussed specific chapters that would be included in a written agreement.

In terms of investment, Korea asked China to designate only restrictions, while China tried to curb investment by writing an agreement based on only a few points.

Korea proposed that Beijing streamline the customs process and accept more products as “made in China” in a bid to expand exports of popular products such as petrochemical products and IT devices.

Korea sought stronger environmental regulations on Chinese products and services, but the Chinese did not respond.

Korea’s interest in an FTA with China began in 2004 during a meeting of ASEAN economic ministers. After preliminary discussions in 2010, the first round of negotiations took place in May 2012 in Beijing.