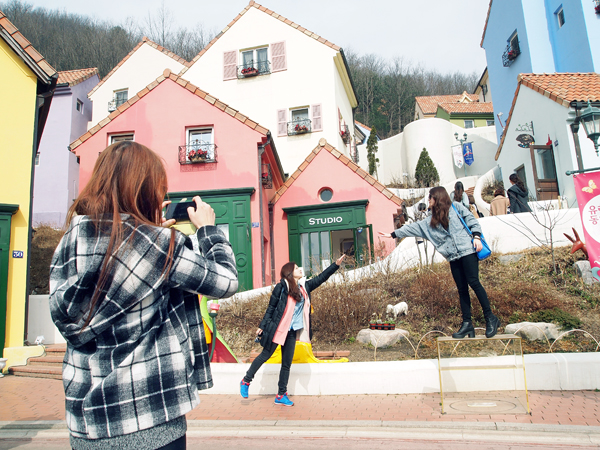 Petite France in Gapyeong, Gyeonggi, is attracting more tourists than usual thanks to being featured in SBS’s “My Love From the Star.”Provided by Petite France

It was a quiet Sunday afternoon at Incheon University. Out of nowhere female voices screamed out “Mr. Do Min-joon!” And, just like that, the silence of the campus was gone.

The scream came from a group of Chinese tourists who had found the Korean sign that reads “Location from the drama ‘My Love From the Star.’?” On the sign there is also a picture of the drama’s leading man, Kim Soo-hyun, who played Do Min-joon, an alien stranded on Earth for 400 years.

The 13 tourists from Shanghai all recognized the spot immediately as the place where Do Min-joon took Cheon Song-yi (Jun Ji-hyun) when she was swarmed by the paparazzi. Others were quick to point out the bench where Semi (Yoo In-na) and Hui-kyung (Park Hae-jin) sat. 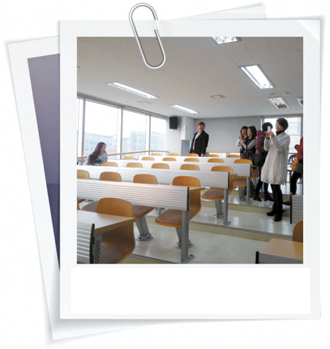 Chinese tourists visit a lecture hall at Incheon University where “My Love From the Star” was filmed. [JoongAng Ilbo]

Over in Room 304 of the School of Information Technology, where scenes of Do Min-joon teaching were filmed, a fight breaks out over seats.

A seat in the third row from the back, third from the window on the left side of the room, as well as the seat that’s third from the front, third from the aisle are both named the “Cheon Song-yi seat,” and the tourists were busy taking pictures of it.

“I’ve watched ‘My Love From the Star’ more than 10 times,” said Wang Ai Ling, 25, as she took photos furiously. “The thing I wanted to see the most in Korea was Do Min-joon’s lecture room.”

It’s not hard to see that the popularity of the SBS drama has spilled over into tourism.

Because of the line “A snowy day calls for chicken and beer,” China has been swept up in a frenzy for the representative Korean nighttime snack, while earlier this month, Kim Soo-hyun was paid some six million yuan ($965,300) for an eight-hour stay in the nation for a TV show. 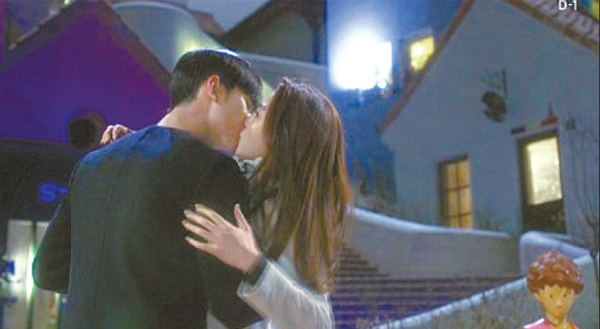 Petite France is where Do Min-joon (Kim Soo-hyun) and Cheon Song-yi (Jun Ji-hyun) shared a famous kiss scene.Provided by SBS

And now Chinese tourists are flocking to the drama’s locations in Korea, breathing life into what is usually the off-peak season for tourism.

Even places that are usually far removed from tourist routes have been affected by the drama. Incheon University has become such a must-visit place that the school is offering a guided tour for Chinese tourists. The university’s marketing division says that the school has been flooded with enquiries by prospective Chinese students.

The French-themed village Petite France in Gapyeong, Gyeonggi, has also gained tourism thanks to its role in the drama.

This was the colorful village where Min-joon said the famous line “This is the most selfish thing I can do to you” to Song-yi, kissed her and professed his love.

Due to the demand, the theme village has extended its operating hours from 6 p.m. to 8 p.m.

Fans of the drama are visiting even the most obscure places, like a quarry in Seoksan, Incheon, where the drama filmed the scene when Min-joon used his supernatural powers to stop Song-yi’s car from falling over the cliff. Despite the entrance being closed for safety reasons, Chinese tourists still come to pay their respects.

The local government is currently developing ideas to market a drama trail, and Chinese signs will be placed at Incheon University, Songdo Central Park and Incheon City Museum.

The Gyeonggi Tourism Organization is also thinking of putting together Petite France and the Korean Folk Village as a tour package for Chinese tour companies.