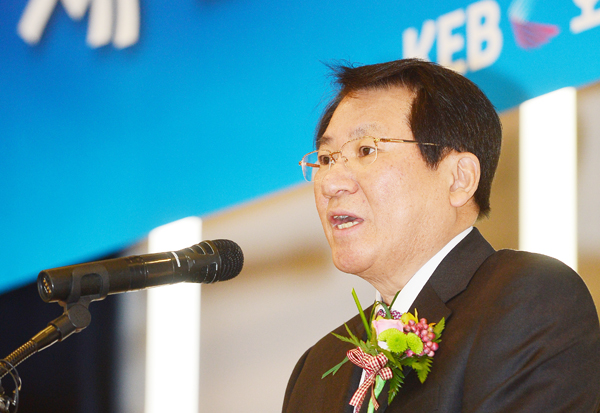 He also said it was a priority to strengthen its global capacity.

“Currently, KEB is in a very difficult situation,” Kim told reporters after his inauguration ceremony, which took place at the bank’s headquarters in Myeong-dong, central Seoul. “I feel a great responsibility becoming the president at such a time.”

Around 300 officials attended the event, including Kim Jung-tae, the chairman of Hana Financial Group, which owns KEB.

Kim’s remarks come as KEB, along with other banks, have been suffering from deteriorating profits due to low interest rates and the sluggish economy. KEB’s net profit in particular dropped 45 percent last year, from 655.2 billion won ($606.3 million) in 2012 to 360.4 billion won.

As part of efforts to enhance the profitability of the bank, Kim said that it would expand its customer base of small and midsize companies and self-employed businesspeople. Currently, KEB’s major corporate customers are large companies.

Earlier on in his inauguration speech, Kim, who has been with KEB for 32 years, emphasized that “we are in the most critical condition since the 1998 Asian financial crisis” and that “profits have fallen one-third.”

“However, crisis always comes with an opportunity,” Kim said, noting that employees needed to be trained to become competitive in order to realize that opportunity.

Kim was previously the president of KEB Capital and is the successor of Yun Yong-ro.

Kim also mentioned in his speech that KEB should establish a foundation of growth to recover its business, improve its competitiveness by continuously strengthening its global business capacity, enhance communication and recover customer trust.

“We will set our position as a global leader among local financial institutions by expanding our overseas network and entering into foreign markets,” Kim said. “This includes the new Chennai branch in India that is expected to open this year and a local corporate branch in Russia, along with other future growth markets like developed countries and emerging markets, Africa, the Middle East and Southeast Asia.”

Kim also told reporters that he will continue to create synergy with Hana Bank, which is also under the same financial group.

“There has been synergy [with Hana Bank],” Kim said. “KEB is known for its foreign exchange affairs, loan business and corporate finance, and we have been delivering our know-how to Hana Bank. KEB also has received know-how from Hana Bank in areas like retail and private banking business.”