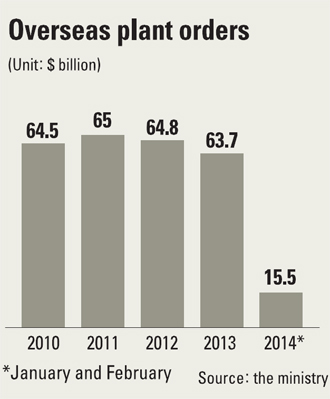 Overseas plant orders have grown sharply in the first two months, according to the government.

The Ministry of Trade, Industry and Energy said yesterday that orders for overseas plants in the first two months amounted to $15.5 billion, which is a 58 percent increase from the same period last year.

The ministry said that at the current pace it will easily reach its target of $70 billion by the end of the year. Last year, overseas plant orders shrunk 1.7 percent compared to the previous year, to $63.7 billion.

The ministry cited political and social instability in the Middle East and the continuing financial crisis last year as the main reasons for the decline.

The bulk of the orders last year came from Asia, which accounted for 39 percent, followed by the Middle East with 22 percent and Europe with 15.4 percent.

The biggest orders were for oil and gas plants, which accounted for 28.7 percent, followed by marine related plants at 28.5 percent.

Petrochemical plants only accounted for 8.2 percent of orders made last year.

This year’s sharp increase was largely thanks to major projects Korean companies won in the Middle East including a $900 million ethylene project that SK E&C won from Egypt Carbon Holdings in January.

The ministry said that although there are still uncertainties including instability in emerging markets, there are several positive signs, including increasing petrochemical plant orders from the Middle East.