Daegu’s trash ends up in museum

Daegu’s trash ends up in museum 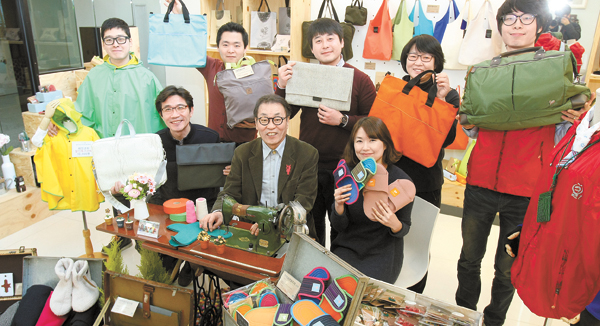 DAEGU - Jung Yong-bin, the director of the Daegu Gyeongbuk Design Center, never expected to find inspiration in the trash, much less make a business out of it.

But it happened randomly one day in 2010, when he found pieces of high-quality fabric in a garbage can beside his textile research lab. So he picked up the scraps and presented them to his employees in the design center, telling them simply, “Make something new.”

One of the workers produced a pair of matching slippers, piecing together the fabric in patches. The reaction to the items from the other employees and their acquaintances was promising, and that’s when a bright idea was born.

The following year, the design team competed in a regional brand exhibition hosted by the Ministry of Employment and Labor to obtain the financial backing needed to establish a business. Their luck persisted, and they won the grand prize of 750 million won ($700,000) in cash, which helped their start-up finally take root in June 2012. They set up their first shop on the second floor of the Daegu Gyeongbuk Design Center.

Afterward, Jung and his team started looking for partners to collect textiles from, and 30 companies volunteered. After the team found suppliers, they needed a production line skilled in sewing and craftsmanship, so they hired seven social enterprises in Daegu known for their technique and attention to detail.

The company’s marketing and sales are handled by volunteers, including design center employees and students from the Catholic University of Daegu.

Since then, The Nanugi, as the business has come to be known, has flourished as Korea’s new “recycling brand,” gaining a reputation across the globe as a self-supporting social enterprise that transforms abandoned textiles into high-quality goods.

The Nanugi, which in Korean literally means “more sharing,” has worked to transform every kind of leftover textile into a functional and aesthetic product - leftover leather from shoes is made into a purse, for instance, or leftover polyester from a dress is transformed into a lap blanket.

“[The product] has high marketability with high business value - getting the material for nothing,” said Lee Kyoung-nam, a manager of the enterprise.

The business also integrated a philanthropic angle in its approach, providing work to the handicapped and the elderly, who are responsible for putting together each product. Each product is designed to be manufactured easily, the company said, so employees can easily piece them together.

Sales of its products started through online shopping malls, including GS Shop and Lotte, and over the months since its inception, the company expanded into a sort of “social business union,” consisting of its headquarters, responsible for design and sales, and its local branches in Daegu City and North Gyeongsang, which handle production.

In fall 2012, in a significant break, The Nanugi extended its presence to the MoMA Store, the flagship store of the Museum of Modern Art in New York City.

Michele Caniato, the president of Material ConneXion, the textile and raw materials consulting company, was the first to propose bringing The Nanugi’s products to the shop, calling the Daegu city center somewhat unexpectedly to pitch the idea.

After a month, about 30 products, including bags, purses and lap blankets were arranged at the MoMA store. Six months later, in 2013, the same products entered the Museum of Contemporary Art in Tokyo by way of MoMA’s recommendation.

Now, working under the title “Miracle From Textile Waste,” The Nanugi is set to open its second store in Dongdaemun Design Plaza.

Its location strategy is centered on attracting foreign buyers visiting the plaza to expand its business abroad, with part of its profits going toward that end.

Additionally, the government has offered about 800 million won for two consecutive years to support The Nanugi as a representative social business that offers job opportunities to the disadvantaged.

In 2012, the company’s total revenue amounted to 500 million won, jumping to 1 billion won in 2013. For this year, the team hopes to increase their annual sales to 2 billion won.