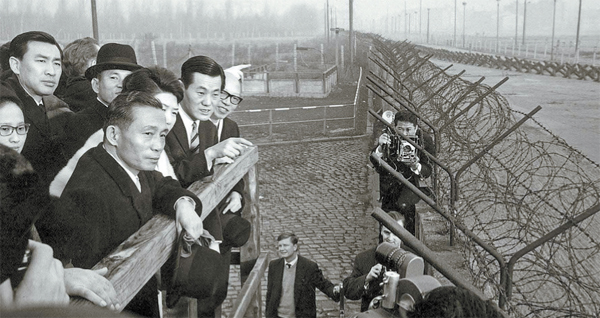 Early this year, President Park Geun-hye put the issue of unification on her agenda. She pledged to “build up the groundwork for an era of unification on the Korean Peninsula in order to reduce social friction and cost due to division.”

But South Korean society is largely indifferent to the issue.

An annual poll conducted by Seoul National University’s Institute for Peace and Unification Studies demonstrates the public’s apathy toward unification. Since 2007, the survey has randomly selected 1,200 adults to ask them about the necessity of unification.

The institute reports that people in their 20s and 30s have been increasingly responding, “We are reluctant about unification because we will have to feed the poor North Korean people.”

President Park Geun-hye is expected to learn about unification during her state visit to Germany starting Tuesday, where she will meet with German Chancellor Angela Merkel, who came from the poor East.

The visit is seen as a “field study” for her, to learn the lessons of Germany’s experience with unification. She is visiting Berlin and will see the site of the former Berlin Wall, as well as Dresden, which was in former East Germany.

Back home, analysts say a growing indifference toward the idea of unification - or an active distaste - is due to how South Koreans perceive Germany’s unification process. The cost and social confusion the unified Germany suffered has made South Koreans fear unification with the impoverished North.

Germany spent approximately 1.4 trillion euros ($1.9 trillion), estimated at 1,750 trillion won in today’s money, during the 15 years after the unification of the two territories. The unified government had to pay a large amount of money for pensions and compensation to those who lost jobs after unification.

South Koreans came to consider unification as a kind of monster that would destroy the national economy, not a key to future prosperity.

But their memories of the process in Germany are incomplete.

After Germany launched a project dubbed “Agenda 2010” in 2003 to salvage its economy, it finally overcame the financial difficulties that arose from unification, in 2006.

Briefly known as the “sick man of Europe,” Germany is back to being the “engine of Europe” or the “purse of Europe.”

Analysts in Seoul say Koreans’ fear of the cost of unification is exaggerated. Although Germany spent about four or five percent of its GDP on unification at the time, few Germans now complain about suffering from the outlays.

“The German government raised money through loans or issuing government bonds for about 70 percent of the cost of unification,” Yeom Don-jay, dean of Sungkyunkwan University’s Graduate School of Strategic Studies, said. “Households only paid two percent of their income for unification through taxes.”

“The expense of unification is not a cost as much as it is an investment,” Rhee In-je, a lawmaker of the ruling Saenuri Party, said. He points out that the financial burden of maintaining the division and a big military disappears after unification.

West Germany’s support for the East German economy was also large before unification, analysts say. When the two Germanys were divided, West Germany provided about $2 billion in yearly aid to the East. But 71 percent of that aid was for daily necessities or other relief supplies provided by civilians, such as those who had relatives in the east, or through churches.

The government’s aid was restricted to humanitarian support or loans. It was not pumping money into the East for free.

“The situation of the two Germanys is far different from that of ours, in which North Korea is suspected of exploiting the wages of workers in the Kaesong Industrial Complex,” said Ahn Chan-il, a defector turned analyst in Seoul.

Estimates of the cost of unifying the two Koreas vary depending on the analyst. But most analysts say the cost will grow - or even snowball - as time goes by and the economic gap between the two Koreas widens.

But as the separation continues, the cost of South Korea’s national security requirements as a result of the division also rises. In 2007, the National Assembly estimated that South Korea would spend $1.5 trillion in total over the next three decades to maintain the division. Most of the expense is for defense against threats from North Korea.

This year’s defense budget for South Korea is about 35 trillion won ($32 billion). Analysts say that the budget could be halved without the threat from Pyongyang.

In contrast, a report by the National Assembly in 2010 titled “Issues and Tasks for the Cost of Unification” said that if the two Koreas are reunited sometime between 2015 and 2030, the cost of unification would be between 6.6 percent or 6.9 percent of South Korea’s GDP for the next decade but that the economic benefits would account for 11.25 percent of GDP during the same period.

Analysts also say that about 500,000 jobs would be created annually to develop North Korea’s light industry, schools, police services and other sectors.

For President Park’s Germany trip, an unprecedentedly large economic delegation will be accompanying her, consisting of 105 members, 71 of whom are owners or operators of small or midsize companies.

“We expect interaction between our small enterprises and German companies who are ‘hidden champions’ equipped with internationally recognized technologies,” an official of the Ministry of Trade, Industry and Energy said.

“We could probably find the lesson of Germany’s unification through the passion of former German president Richard von Weizsacker, who said, ‘The German question will remain open as long as the Brandenburg Gate is closed,’?” Lee Yeong-gi, a professor at Hamburg University, said.