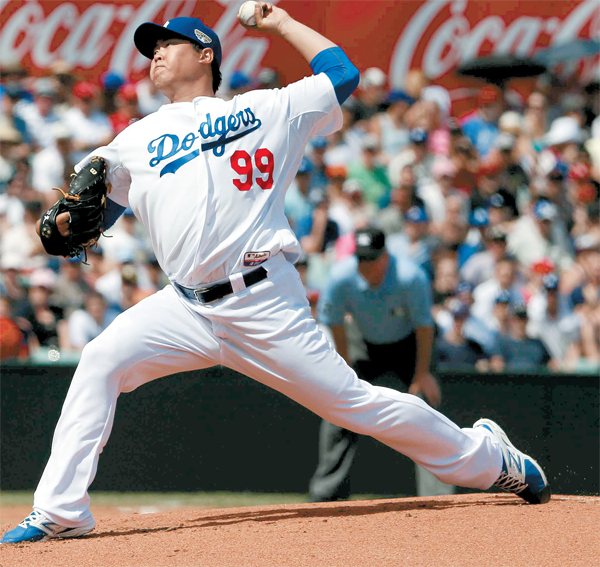 Ryu Hyun-jin of the Los Angeles Dodgers pitches against the Arizona Diamondbacks in the bottom of the second inning yesterday at the Sydney Cricket Ground. [REUTERS/NEWS1]

Ryu Hyun-jin of the Los Angeles Dodgers started the 2014 season with a win, pitching five scoreless innings yesterday in a 7-5 victory over the Arizona Diamondbacks.

In Game 2 of the two-game season opening series against the Diamondbacks at the Sydney Cricket Ground in Australia, the 26-year-old allowed two hits and a walk while striking out five.

Ryu also showed off his hitting skills with a single to right center field in the bottom of the third against D-Back starter Trevor Cahill.

It looked like Ryu’s offseason training, in which he reduced his weight by 7 kilograms (15 pounds), paid off.

In the first inning yesterday, however, he allowed a two-out single to Paul Goldschmidt before striking out Martin Prado. Ryu also allowed a single to Gerardo Parra in the bottom of the second with two outs, then fanned Didi Gregorius to end the inning.

Ryu got into a jam in the bottom of the fourth inning when shortstop Hanley Ramirez mishandled a double-play opportunity.

Goldschmidt reached first after second baseman Dee Gordon failed to catch an easy liner. Ryu struck out Prado, then got a ground ball by Miguel Montero that looked like it would be a double play to end the inning. But Ramirez failed to get either Goldschmidt or hitter Montero out, allowing both to reach base. Ryu, however, retired Mark Trumbo to a fly ball to right field and struck out Parra with a slider that caught the corner of the plate.

There were concerns that Ryu may have injured his right ankle after walking with a limp into the clubhouse from the dugout. Ryu knit his forehead in pain after rounding third base on Gordon’s double in the top of the third inning.

He scored a run later in the inning on Yasiel Puig’s single.

Ryu told Korean media his right big toenail bothered him after he ran the bases, but said it would not affect his next scheduled start.

The Dodgers’ next game will be Thursday at home against the Angels.

Meanwhile, 37-year-old veteran reliever Lim Chang-yong who is knocking on the door of the big leagues as a spring training invitee of the Chicago Cubs was sent down yesterday to the Iowa Cubs, the Triple-A affiliate of the club, with six other players. Lim’s ERA in spring training was 4.50 in four innings in four games. He allowed two hits, including a home run, and two walks while striking out three.

Lim has been consistently telling Korean media outlets that he doesn’t want to spend a day in the minors considering his age, so he might either demand the Cubs release him so he can find a spot with another big-league team or he could consider coming back to the Korean Baseball Organization. Lim has been contacted by the KBO defending champions Samsung Lions, whose closer Oh Seung-hwan signed with Japan’s Hanshin Tigers during the off-season.

Lim in fact had been scheduled to be on the mound during Thursday’s home game against the Seattle Mariners, but he did not appear.

A member of the coaching staff told Lim through an interpreter that he would be on the mound in the next game, but sources there said Lim was embarrassed and upset about that sudden decision to hold him out.