You can’t cure love, but you can love cured bacon

You can’t cure love, but you can love cured bacon

NEW YORK - Bacon enriches any dish with a smoky richness, says chef Theresa Gilliam. In her first cookbook, “Bacon 24/Seven,” Gilliam puts her spin on familiar dishes with bacon such as breakfast biscuits and lunch sandwiches. She also shows the versatility of the salted and smoked meat by pairing it with a Bloody Mary, topping it on a cardamom cupcake or mixing it into baklava.

The 34-year-old American author and food stylist, who co-wrote the book with photographer E.J. Armstrong, also teaches readers how to cure and smoke bacon at home.

Gilliam, who was born in Chicago and now lives in Seattle, spoke to Reuters about her passion for bacon and how she cooked some 300 pounds (135 kilograms) of it for her book.

Q. Why did you focus on bacon for your first book?

A. That came from Jane (E.J. Armstrong). She came to me and really wanted to do a bacon book .?.?. She asked me whether I would be interested, wanted to do the food styling and write the recipes and I said, “Absolutely, that sounds fantastic and everybody loves bacon even though there are other bacon books out there.” We felt like there was room for one more book.

What is your tip to cook American bacon?

In the book, there are three schools of thoughts: stove-top, conventional oven and microwave. Microwave is for convenience. To really cook your bacon properly, you want to use an oven or stove top. It’s important that the pan or the oven be at room temperature before you put the bacon in. This keeps the bacon fat cooking slowly. It doesn’t scorch it and maximizes the fat rendered out from the bacon.

What is your tip to make your own bacon?

If you want to smoke it, you really need to get hold of a grill. You could use a gas, charcoal or propane grill. You want to heat the bacon indirectly so it’s not directly over a flame. You have the charcoal or heating element on one side and the bacon on the other and then you add your wood chips. 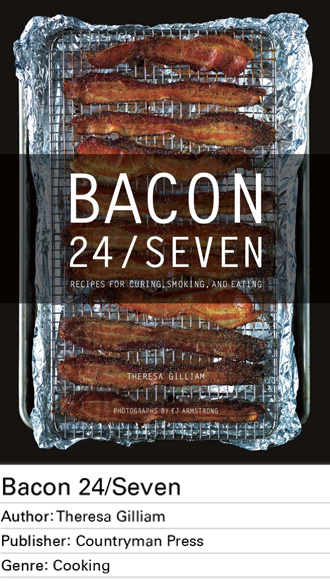 What is the most unusual dish you paired with bacon in the book?

One of the more surprising ones is the bacon baklava. It’s unusual enough that a lot of people might not have tried that flavor combination. It’s actually a very traditional baklava recipe. You just add the bacon to the ground nuts mixture. The bacon balances to the honey syrup and the salty nuts which are the sweet and savory.

You started as a chef, then left to go into the film industry and you returned to be a recipe developer and food stylist. Why?

I worked as a chef in Seattle for a couple of years. I always loved food and had been passionate about cooking. Being a chef in the restaurant just wasn’t a good fit for me. I had studied film and video production while I was in school and I decided to pursue that. I worked as a grip in the film industry for about five years. The transition to food styling was kind of slow. I happened to have met a photographer on a film set. We started talking about food photography. It turned out there was not a lot of food styling assistants in Seattle. It was a perfect marriage of my passion for food and my passion for film and photography.

How often do you have bacon now?

I had it a lot more before writing the book. When we starting shooting the photos for the book, we had 300 pounds of bacon to cook for the shoot. I was two months pregnant while working on the shoot. I had morning sickness and didn’t want to eat bacon for a very long time. But now I’m back. We eat bacon once every other week or once a month.

· Trim the pork of excess fat and membrane.

· Rub the pork generously with the spice mixture.

· Store any extra spice rub in an airtight container for another use.

· Wrap the pork in strips of bacon, overlapping the pieces slightly and tucking the ends underneath to hold them in place.

· Heat the oil in a roasting pan or a large skillet over a medium high heat.

· Sear the pork until it is brown on all sides, about 8 minutes total.

· Transfer the pan to the oven and bake the tenderloin until the core temperature reaches 155 degrees Fahrenheit (68 degrees Celsius), about 15 minutes.

· While the pork is cooking, whisk together the apricot preserves and mustard in a small saucepan.

· Warm the mixture over a medium low heat until it begins to bubble, about 5 minutes.

· Remove the pan from the heat and stir in the rosemary.

· A few minutes before the pork is ready to come out of the oven, spoon a few tablespoons of glaze evenly over the meat.

· Serve hot slices of the pork with the remaining glaze alongside.