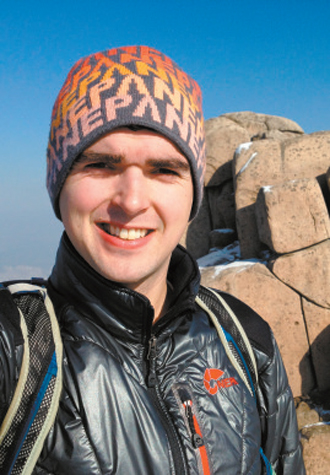 James Hooper stands at the top of Mount Dobong in Dobong District, northern Seoul, in January. “I frequent Mount Bukhan and Mount Gwanak during my [time off],” he said. By James Hooper

When James Hooper was considering colleges, he was offered a scholarship to attend the University of Cambridge, one of the world’s top ranked institutes of higher education, with the opportunity to enroll in its Department of Earth Sciences.

But instead, the young Englishman, now 27, chose to go to Kyung Hee University in Dongdaemun District, northeastern Seoul.

Now a senior majoring in geography, Hooper admitted he was fascinated by Korea’s “dynamic yet static culture.”

“I naturally grew fond of Korea after hearing so many magnificent anecdotes from a friend of mine who had visited the country,” he said, explaining his choice to come to Seoul.

Hooper spent about a year teaching himself the language before enrolling in school and said he only registered for courses taught in Korean.

He also never misses an opportunity to attend drinking parties with the locals, all for the sake of “blending in.”

Hooper grabbed worldwide attention at the age of 19, when he became the youngest Englishman to climb Mount Everest.

In 2008, he and friend Rob Gauntlett were also awarded the National Geographic Adventurers of the Year prize following their 13-month expedition from the North Pole to the South Pole. For that venture, they stuck to eco-friendly means of transport, using bicycles, dog sleds and skis.

He conquered that challenge in just 99 hours, taking the journey with two school companions.

At Kyung Hee University, Hooper was the first foreigner to make a bid to run for vice president in the student presidential elections in 2012.

His academic achievements go far, as well, and he even had his thesis published in GeoJournal, an international academic publication. He is also an honorary appointed member of the Royal Geographical Society.

“The work Hooper submits in class is way above undergraduate level,” said Hwang Chang-soo, one of Hooper’s professors.

“His thesis could immediately be applied to the real business world,” he added, referring to the young explorer’s paper that analyzed the tour patterns of travelers to Korea based on length of stay, budget and travel distance.

Using statistics from the Korea Tourism Organization, Hooper found that the farther tourists travel to Korea from their home countries, and the more time they spend in the foreign land, the more weight they put on cultural sightseeing than shopping.

But with college life now coming to an end, Hooper’s next adventure, he said, will be to attend graduate school to study polar regions, either in Canada or Australia.

“I studied geography and ventured through the world in a quest to learn more about the interaction between nature and humans,” he said. “Unlike civilized society where humans dominate the wild, polar regions are the only places where everything and everyone appreciate each other’s true character.”

After completing his academic trajectory, Hooper said he plans to return to Korea to apply what he has learned to society.