‘Heirs’ star a hit in Philippines

‘Heirs’ star a hit in Philippines 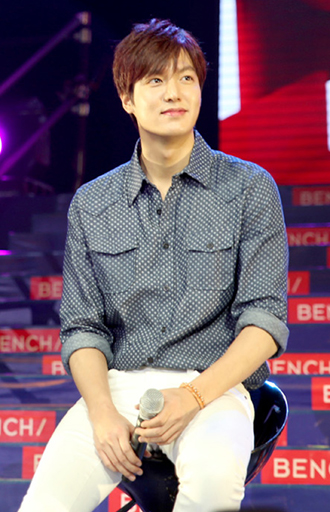 Korean actor Lee Min-ho has seen a steady rise in his popularity in Southeast Asia, especially in the Philippines, his agency Starhaus Entertainment said yesterday.

On Friday, Lee hosted a “Fun Meet” - a promotional event in which he greets fans - at the Smart Araneta Coliseum in Manila, Philippines, for the clothing brand Bench, for which he models. More than 15,000 people packed the venue to see him.

According to local media, throngs of people who weren’t granted admission were gathered outside the coliseum hoping to catch a glimpse of the star.

Lee visited the Philippines before in 2012, though local response was much smaller by comparison.

On the webpage of local broadcaster ABS-CBN in the Philippines, the “Fun Meet” event was selected as one of the Must-See programs. Photos from the event were also posted there.

The 26-year-old actor rose to stardom in 2009 after the KBS megahit “Boys Over Flowers.” His following increased after the release of the SBS drama “The Heirs” (2013), after which Lee became one of the most prominent Korean Wave stars.

He was recently cast in the Korean noir film “Gangnam Blues,” along with actor Kim Rae-won, which starts filming in April.