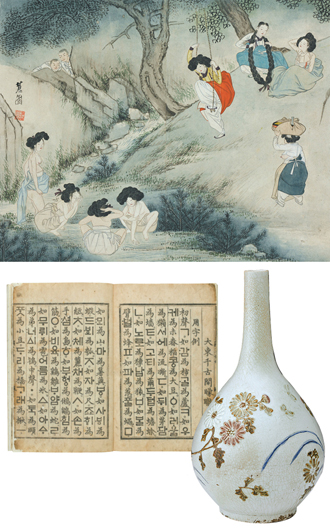 A rare look at Korean tradition is on display now at the newest and most modern of Seoul landmarks, the Dongdaemun Design Plaza.

The Kansong Art Museum, which was established in 1938, has become one of the most important private museums established in Korea. For years, it opened its collection just twice a year for a fortnight each time at its home in Seongbuk-dong, northern Seoul.

Now, for the first time, it is venturing out to present many works from its huge collection of Korean paintings, antiques and celadons.

“The rising interest over the past six or seven years was much bigger than throughout the previous 30 years as more people have been showing more interest in the country’s ancient art,” said Chun In-keon, chief administrative officer of the Kansong Art and Culture Foundation.

“Because of the old facility we have, as the number of visitors to the museum has gone up, it’s grown more inconvenient, so we hope more people will have a more pleasant time appreciating Korea’s cultural assets here.”

With a larger space to display the collection, art lovers will finally get to see the fully unrolled, eight-meter (26.2-foot) version of “Scroll: Road to Shu” by Joseon-era artist Sim Sa-jeong (1701-69), which the museum had only shown partially in the past.

Among the 100 artifacts the museum is showing this time, there will be several designated as national treasures. The “Hunminjeongeum” (National Treasure No. 70), a guide to the creation of hangul, the Korean alphabet, will be on display behind glass. On the other hand, “Blue and White Porcelain Jar with Chrysanthemum Designs in Underglaze Iron” (National Treasure No. 294), a celadon from the Joseon era, will sit in the middle of the exhibition hall to better display its intricate designs.

There are 30 paintings from the “Album of Genre Paintings” by Joseon-era artist Shin Yun-bok (1758-?), which is part of National Treasure No. 135 - however, the museum plans on showing just 10 pieces at a time, rotating those on display, but it did not specify when.

As the museum is reaching out to a wider range of visitors this time, it has decided to take the opportunity to explain a little bit more about Kansong, after whom the museum was named. Kansong’s real name was Chun Hyung-pil (1906-62), the man who acquired the impressive collection. After Kansong started collecting Korean antiquities in his late 20s, he travelled all across Korea and neighboring countries to find more precious items. He bought a number of blue porcelain objects from the Briton John Gadsby, many of which later were designated as national treasures, and he went to Osaka, Japan, to bring back the painting by Shin Yun-bok, also now a national treasure. He kept collecting until Korea celebrated its independence from Japanese colonial rule in 1945 to stop cultural items from being taken out of Korea while the country was struggling to recover.

“He realized the importance of ‘cultural independence’ as he considered keeping cultural assets safe one of the most urgent things that needed to be done for a country to secure its future,” said the Kansong Art and Culture Foundation.

Baik In-san, the foundation’s art director, added that Kansong stopped collecting after the country was liberated as he believed that the artifacts would then stay within Korean territory, even when they were bought and sold.

To trace back Kansong’s journey, the first part of the exhibition, which runs until June, shows his travels. The second part, which will begin in July, will show more extensive collections, including some religious artifacts, along with everyday items used in Goryeo and Joseon times.

Because the museum is displaying so much of its collection at the design plaza’s exhibitions, it will not be holding its fortnight exhibitions at the old Kansong Art Museum in Seongbuk this year, except maybe for a very small, more academic exhibition in the fall.

“Because we have had exhibits for about 40 years at the same place, not only we, the planners, felt something different from displaying antiquities, but also artifacts themselves seem to be shy in the new venue,” said Baik.

“Visitors may also feel the same new awkwardness, but we hope that sentiment becomes something good and warm.”

*The exhibition “The Treasures of Kansong” lasts until Sept. 28. The exhibition will change what is on display after June 15, and the second part of the exhibition starts on July 2. To get to the exhibition at Dongdaemun Design Plaza, go to the Dongdaemun History and Culture Park station, line Nos. 2, 4 or 5, exit No. 1. The exhibition opens each day at 10 a.m.. On Tuesdays, Thursdays, Saturdays and Sundays it closes at 7 p.m., while on Wednesdays and Fridays it stays open until 9 p.m. The plaza is closed on Mondays. Tickets for adults are 8,000 won ($7.39) and for a group of 20 students are 4,000 won. For more information, go to www.ddp.or.kr or call (02) 2266-7077.