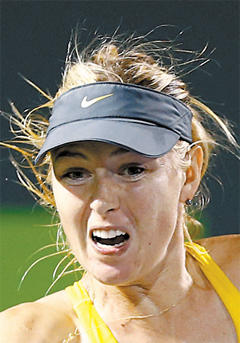 Maria Sharapova needed nine match points before she finally closed out a win Saturday in the third round of the Sony Open, beating Lucie Safarova 6-4, 6-7 (7), 6-2.

Sharapova had two match points in the tiebreaker and seven more in the final game. The No. 26-seeded Safarova stayed alive with a succession of vital winners.

“She kept hitting unbelievable shots,’’ said Sharapova. “One more. One more. I said, ‘How many chances are you going to get?’’’

With the capacity crowd in a frenzy, a long exchange on the final point ended with Safarova pushing a weary forehand into the net. She then shared a hug with Sharapova.

The match took three hours and ended at 10 p.m. to conclude an 11-hour day session on the stadium court, with two night-session matches yet to come.

“After a match like that, it’s tough to have only one winner,’’ said Sharapova, “because both players give a lot and both want to win so much.’’

Williams’ match was a thriller, too. A succession of long rallies left her grunting, stumbling, lunging, squealing, flailing her arms and scolding herself.

Despite all the drama and trauma, she moved one round closer to a record seventh Key Biscayne title.

Williams is playing in her first tournament after a monthlong layoff, and rustiness might explain her 41 unforced errors, including seven double-faults. And the 20-year-old Garcia kept Williams on her heels with deep groundstrokes and serves that topped out at 117 miles per hour.

“I can play a hundred times better,’’ Williams said. “I really gave myself a tremendous amount of trouble out there. Granted she played great, but I made so many errors - 40-something errors. It’s not the way to play professional tennis. Maybe amateur.’’

Three-time champion Novak Djokovic was off Saturday but advanced to the fourth round anyway when his next scheduled opponent, Florian Mayer, withdrew because of a groin injury.