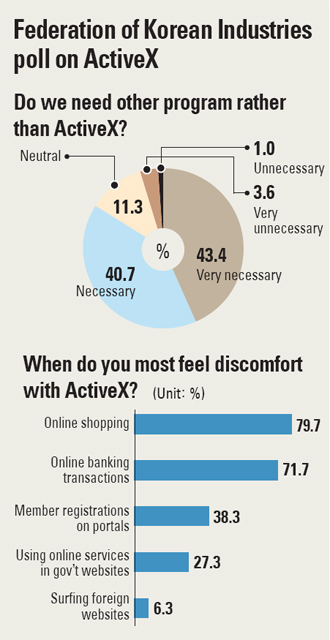 Most Koreans want to see the ActiveX software program scrapped, citing difficulty making online transactions, according to a survey by the Federation of Korean Industries.

The federation, a lobbying group for the country’s conglomerates, said yesterday that it surveyed 700 people nationwide and 78.6 percent of the respondents said they wanted the use of the ActiveX software to be discontinued, while only 6.7 percent opposed the idea.

ActiveX from Microsoft is a plug-in software framework that allows users to see various files and data on the Internet. To run certain programs using Microsoft’s Internet Explorer, it must be installed.

However, although ActiveX has become an integral part of the country’s online environment, it has been troublesome for users of different browsers like Chrome and Safari, and mobile platforms.

ActiveX was one of the hot topics in a deregulation forum last Thursday at the Blue House after a federation official said the program prevents Chinese customers - especially fans of Korean TV dramas - from making purchases at local online shopping malls.

President Park Geun-hye also acknowledged that online authentication certificates, which are based on ActiveX, are an obstacle for local online shopping malls trying to attract foreign customers. Currently, those who want to purchase products costing more than 300,000 won ($277) at a local online shopping mall must use an online authentication certificate service.

The federation’s survey showed that 84.1 percent of respondents want the development of a new system that doesn’t require ActiveX, and 88 percent said they had experienced difficulties with the program.

The survey showed that 79.1 percent of respondents cited online transactions as the biggest problem with ActiveX, while 71.7 percent said they had difficulties with banking transactions.

The lobbying group said that despite the advanced IT infrastructure of Korea, the country’s online shopping sector compared to GDP is only a fifth to a seventh that of the United States, Japan and China.

“ActiveX is becoming a barrier to creative distribution,” Yoo Hwan-ik, who heads the federation’s industrial research division, said in a statement. “If this problem is corrected, Korea can reduce its 720 billion won deficit in the international e-commerce field and boost local online market.”

Choi Moon-ki, the minister of science, ICT and future planning, said in the ministry’s workshop on Saturday that it will provide an online environment and online authentication certificate without ActiveX. The ministry is expected to work closely with the Financial Supervisory Service and Financial Services Commission to find solution for ActiveX problem.

Meanwhile, following Thursday’s forum on red tape, other ministries also are coming up with ideas to ease business-related regulations or scrap them entirely.

Seo Seung-hwan, minister of land, transport and maritime affairs, also held a workshop on Saturday to discuss deregulation related to areas for which the ministry is responsible.

“For the deregulation movement to be successful, what’s important is to change the attitude of public servants,” Seo said during the ministry’s workshop, which ran more than two hours. “Even if it is a large-scale improvement, we need to find solutions to minimize the discomfort by considering the point of view of all Koreans.”

The Ministry of Land, Transport and Maritime affairs on Thursday listened to complaints regarding regulations on car tune-ups and real estate.