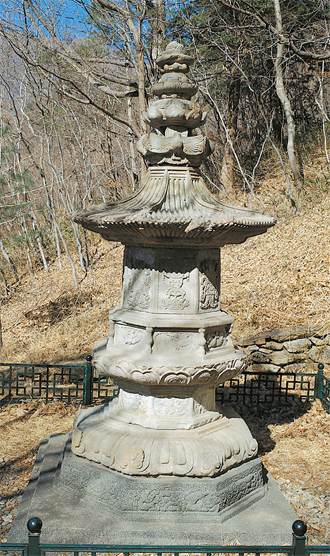 This octagonal stupa is located on the mid-slope of a mountain lying to the north of Yeongok Temple.

The temple had been famous for Zen practice, producing renowned monks until the early Goryeo period (918-1392). It is also the site of the East Stupa (National Treasure No. 53) and the West Stupa (Treasure No. 154).

This stupa is very similar in shape and size to the eastern one, which is considered the most beautiful of the three.

While the eastern one was built in the late Unified Silla period, this stupa is believed to have been erected in the early Goryeo period.

The bottom portion is carved with cloud designs; the upper portion is engraved with 16 double lotus petals. On each side of the octagonal body, or reliquary, are engraved incense burners and the Four Guardian Kings. Four widespread-winged phoenixes and lotus flowers are carved on the final made of the stone.

As there is no stele left for the stupa, it is not known for whom this stupa is erected.