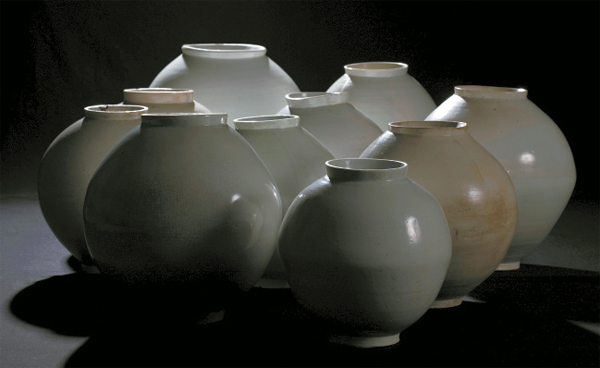 The Sinsa-dong branch of the Horim Museum presents the white porcelain of the Joseon Dynasty (1392-1910). Provided by the museum

Ceramics of the Joseon Dynasty (1392-1910) may not boast the fanciest designs, but their natural and pristine beauty can surely captivate any viewer who gives them a serious look.

For those who want to learn more about this tradition, the Sinsa-dong branch of the Horim Museum is showcasing 90 pieces of Joseon white porcelain ceramics in the exhibition “White Porcelain Jar I: The Whiteness of Generous Forms.”

“While many contemporary artists have praised the beauty of wonho [rounded-style] ceramics, ipho [upright] ceramics have been somewhat neglected by the general public,” noted Ryu Jin-hyun, senior curator of the museum, at a press conference in central Seoul earlier this month.

“By placing the wonho and ipho on separate floors, we tried to let viewers compare the differences in white porcelain’s designs based on different periods.”

Throughout the years, rounded ceramics have been widely celebrated by the nation’s prominent artists, such as abstract art pioneer Kim Whanki (1913-74), who enjoyed depicting the beauty of Korea’s “moon jars” in his works.

White porcelain was mainly used by the royal family in the Joseon period. “In the mid-15th century, the government started to hire the leading potters of the country and made them produce ceramics for the royalty,” the museum explained. 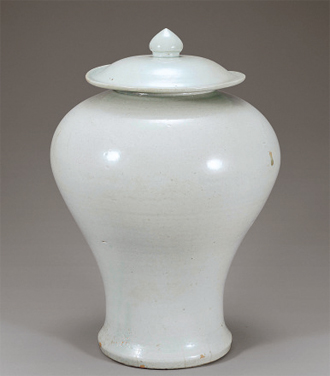 A wide porcelain lidded jar made in the 15th century.

The royal family used white porcelain from cradle to the grave. When a child was born in the palace, servants sealed the placenta in a lidded white porcelain jar, usually in an ipho ceramic. And when someone died, their cherished items were buried with the body in the white porcelain.

The serene white porcelain of the Joseon era contrasts notably with the audacious designs from the Goryeo Dynasty (918-1392). It was a change that was more than just artistic, it was political.

In fact, after Joseon was established, now following a neo-Confucian doctrine, the new aristocracy tried to differentiate themselves from Goryeo’s ruling class by stressing frugal and discretion, as stressed by Confucius. With the change in ideology, so, too, did ceramics fade into whiteness.

However, the curator made it clear that the end of the elaborate designs did not mean a deterioration of the ceramics’ quality.

“Actually, the white porcelain is an evolved version of celadon. In order to glaze whiteness onto the china, potters had to go through countless phases to get rid of the impurities.”

The techniques used to make ceramics white also made them more fragile.

“To tackle the problem, our ancestors came up with the brilliant idea to bond two half-jars into one,” said the museum, explaining how asymmetrical shapes were made.