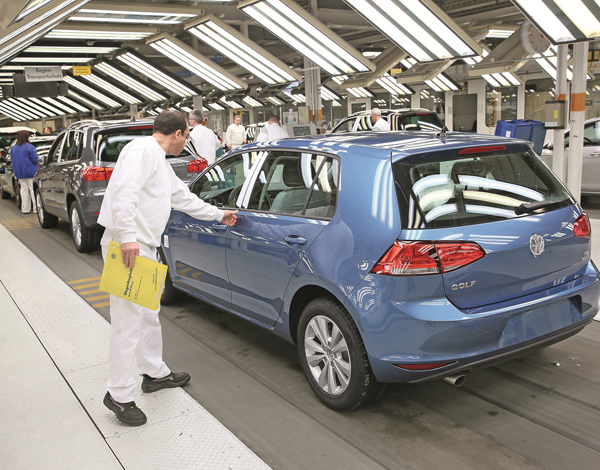 Workers conduct a quality inspection at the Wolfsburg Volkswagen plant.

Volkswagen knows that long-term sustainability can be achieved only when it wins trust from its stakeholders.

The largest carmaker in Europe has maintained a stable relationship with the local community and its employees since it began in the 1930s, when the Beetle was first produced.

In the 1990s, the group faced severe crisis as the sales of models manufactured in Wolfsburg, where its head office is located, decreased sharply. Automobiles produced in the Wolfsburg plant saw a drastic fall of 40 percent, from 886,000 in 1989 to 541,000 in 2001.

Due to the combined effects of slower sales and automation, the group was reluctant to employ more workers, and the local unemployment rate reached 17 percent. The slowdown of the overall local economy resulted in less sales for the group, creating a vicious cycle.

Volkswagen also looks after its employees. The automobile manufacturer already implemented a four-working day system in 1993. At the time, the group had a workforce surplus of around 30,000 due to the automobile industry crisis.

Instead of cutting down the workforce, the company readjusted work time and wages, pursuing coexistent growth with labor.

Such a determination to keep a strong partnership with the local community and employees is based on the belief that shared growth will ensure sustainability in the long run. And it indeed seems like a good reason for Volkswagen’s unwavering leadership in the global market.