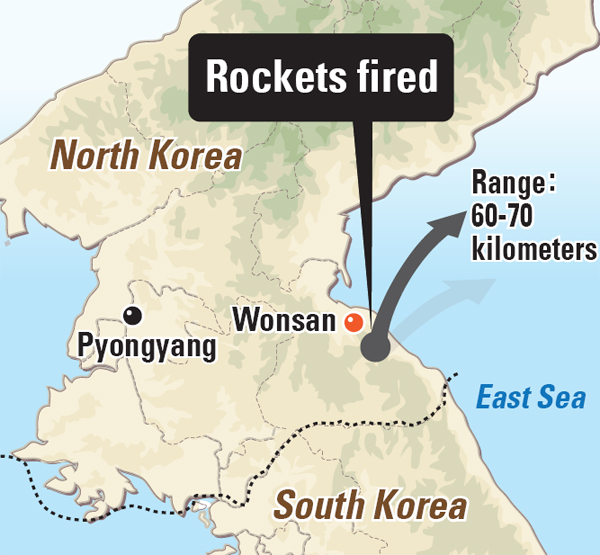 North Korea fired off 46 short-range rockets over the weekend in an apparent protest of ongoing joint military drills between Seoul and Washington, the South Korean military said yesterday.

Thirty rockets blasted off between 4 a.m. and 6:10 a.m. on Saturday from a launch site in the Kalma region in Wonsan city, Kangwon Province, toward international waters off the east coast of North Korea, according to South Korea’s Joint Chiefs of Staff. A second round of 16 rockets was fired between 12:52 a.m. and 2:30 a.m. yesterday from the same spot toward the east.

The rockets were all analyzed to have a range of about 60 kilometers (37.2 miles) and were assumed to be FROG rockets, the South’s military said.

Capable of being mounted on a mobile launcher, the surface-to-surface rocket is known to have been imported from the Soviet Union in the 1960s or ’70s. They were the same type as the 25 rockets Pyongyang launched on March 16, the South Korean military added.

North Korea did not give a warning to vessels in the region in advance like the previous launch, Seoul said.

The launches have also raised alert in South Korea, as it is currently carrying out the joint military drill Foal Eagle with the U.S. military.

Since Seoul and Washington started the drills in February, North Korea has launched a total of 88 short-range rockets, most of which were FROG types. Analysts in Seoul believe those launches were in an apparent protest to the ongoing exercises. Pyongyang has traditionally denounced the regular annual drills, stating they are “a war rehearsal.”

The allies have long maintained that the annual drills are only for self-defense purposes.