On trip, Park to talk unification

On trip, Park to talk unification 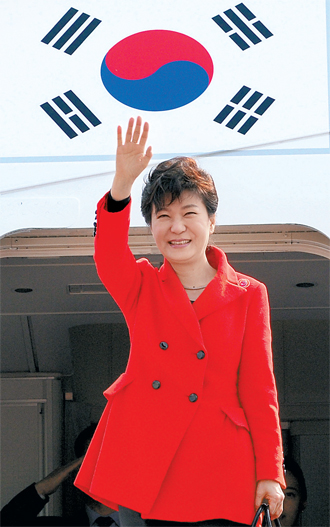 President Park Geun-hye waves yesterday before departing on a seven-day, five-night trip to the Netherlands and Germany. [Joint Press Corps]

President Park Geun-hye embarked on a seven-day overseas trip to Europe yesterday, leaving for The Hague to attend the biennial Nuclear Security Summit, where she will meet with global leaders and discuss ways to further multinational cooperation to prevent nuclear terrorism.

Park is expected to hold a summit with Chinese President Xi Jinping after arriving in the Dutch city.

The meeting between the two leaders will mark the fourth such summit since Park took office last year and the first this year.

The meeting with Xi is expected to center on getting North Korea to resume talks aimed at dismantling its nuclear weapons program, as well as forming a united front against Japan’s continuing attempts to evade responsibility for transgressions committed during World War II.

The fact that Park is scheduled to host talks with the Chinese president during her stay in The Hague underscores the key role and importance China holds in resolving the North Korean nuclear issue.

On the sidelines of the Nuclear Security Summit, set to run through tomorrow, Park will also have a trilateral meeting today with Japanese Prime Minister Shinzo Abe and U.S. President Barack Obama.

The three-way talk carries great significance, as it will be Park’s first formal meeting with the Japanese leader. Park has so far tried to avoid talks with Abe because of his continuous denials of the Japanese Imperial Army’s recruitment of women into sexual slavery during World War II and his visit last December to the Yasukuni Shrine, which honors Japanese soldiers killed in the Pacific War, including war criminals.

The meeting is expected to signal a thaw in frosty relations between the two nations.

The main agenda item for the three-way meeting is expected focus on convincing Pyongyang to abandon its nuclear ambitions and pursue stability in Northeast Asia.

Park will also hold separate meetings with Mark Rutte, the Dutch prime minister, and Dutch King Willem-Alexander, in The Hague.

During those meetings, the leaders are slated to discuss measures to expand cooperation on regional issues and business projects. The Korean government is also set to forge a number of memorandums of understanding in the business sector, according to Blue House sources.

The multilateral nuclear summit follows the one hosted in Seoul two years ago in which leaders from 53 countries and four international organizations, including the International Atomic Energy Agency, gathered to discuss cooperative measures to reduce global nuclear terror threats and improve nuclear security.

On the last day of the two-day security summit, Park will sit down with UN Secretary General Ban Ki-moon.

The president will fly to Berlin on Wednesday to spend two days, where she will have respective meetings with German President Joachim Gauck and Chancellor Angela Merkel as well as tour historically relevant sites around the city.

She is scheduled to visit Dresden and Frankfurt on Thursday and Friday, her last day in Europe, and return to Seoul on Saturday.

“President Park intends to express her strong determination on unification in the face of the international community and to present a detailed direction,” a Blue House official affirmed. “It may be dubbed either doctrine or declaration.”

Her declaration in regard to unification is likely to be delivered in Dresden, where she is set to receive an honorary doctoral degree from the Dresden University of Technology, according to the Blue House.

The capital city of Saxony, Dresden was the political, cultural and economic center of East Germany before the country’s reunification in 1990.

Berlin is the locale many former Korean presidents traditionally have selected to announce messages related to North Korea. However, Dresden also has its own important historical ramifications.

While visiting the city to meet with Prime Minister Hans Modrow on Dec. 19, 1989, five weeks after the fall of the Berlin Wall, Federal Chancellor Helmut Kohl delivered a speech in front of the ruins of the Dresden Frauenkirche, a Lutheran church that had been destroyed in 1945 in Allied air raids on the city. It was turned into a war memorial before being rebuilt after German reunification.

Convinced that East Germans had rejected communism and sought unity, Kohl promised economic aid and described his hopes for a common future within a united Europe.

“And let me also say on this square, which is so rich in history, that my goal - should the historical hour permit it - remains the unity of our nation. And, dear friends, I know that we can achieve this goal and that the hour will come when we will work together towards it, provided that we do it with reason and sound judgment and a sense for what is possible,” he said as he was greeted by thousands of East German citizens.

The fact that President Park will be heading the unification preparatory committee under the Blue House, to be launched next month, underscores the need for her to come up with a more concrete and substantial blueprint for unification.

Her visit to Dresden will be followed up on the same day by a brief trip to Frankfurt, where she will spend a few hours before departing to Seoul, during which she will meet with Korean-German miners and nurses.

Her father, President Park Chung Hee, visited a mine in Hamborn on the Ruhr during his state visit to West Germany half a century ago, when South Korea was struggling to recover in the wake of the 1950-53 Korean War.

“You are going through this hardship thousands of meters below ground in this faraway country all because of your poor country. My heart is broken,” he told the Koreans there.

Many of the miners broke into tears during the speech, and Park was also spotted drying his eye with his handkerchief. The money the miners and nurses sent back home amounted to an estimated $50 million, and many of them have stayed there ever since.

At the time, Korea’s per capita gross domestic product stood at a mere $1,273 - meager compared to $23,837 last year. The country asked the United States for a loan, though America rejected its request.

But Germany lent a helping hand, providing Korea with some $35 million, which also backed Korea’s significant economic growth in the 1970s and 1980s, which is often dubbed the “Miracle on the Han River.”