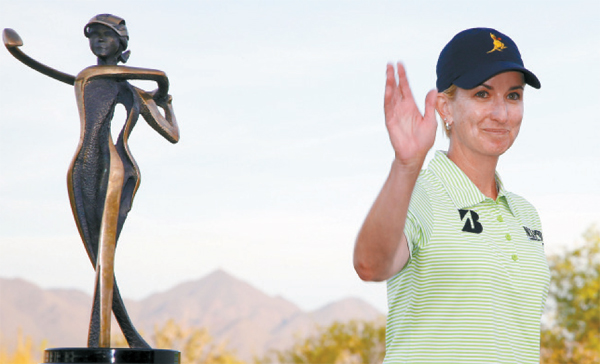 Karrie Webb of Australia waves to the crowd Sunday as she arrives for ceremonies after winning the LPGA JTBC Founders Cup in Arizona. [AP/NEWSIS]

Karrie Webb flew up the leaderboard with a course record 9-under 63, then waited about 90 minutes to see if anyone could catch her in the JTBC Founders Cup.

No one could Sunday, giving the 39-year-old Australian her second LPGA Tour victory of the season and second in four years at Desert Ridge.

For the second time in the event, Webb overcame a six-stroke deficit in the final round to win. In 2011, she closed with a 66 for a one-stroke victory.

The Hall of Famer had 10 birdies and a bogey, playing the back nine in 6-under 30. She birdied five of the last six holes, finishing with a 20-footer on the par-4 18th.

Third-round leader Lydia Ko of New Zealand parred the final three holes to finish a stroke back, along with 2013 winner Stacy Lewis, Azahara Munoz, Amy Yang and Mirim Lee. The 16-year-old Ko finished with a 70. She had a three-stroke lead after birdieing Nos. 2-5, slipped back with bogeys on Nos. 6, 9 and 11 and pulled within one with a birdie on the par-5 15th.

Webb did an interview for the film this week and learned that only about 10 percent of the necessary money had been raised for the movie. Webb is close friends with 90-year-old Louise Suggs, one of the tour’s founding players who was unable to attend the event this year.