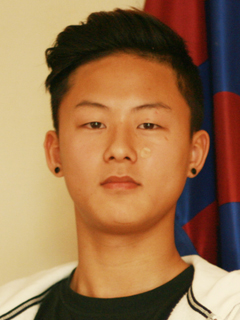 One of Korea’s best young football prospects, 16-year-old Lee Seung-woo of FC Barcelona’s youth team, whose nickname is “Little Lionel,” has been accused of breach of contract by his former agency.

A legal source said on Sunday that S2 Management sued Lee Young-jae, father and authorized representative of Lee, for 150 million won ($139,000) for breaking a management contract. The agency later confirmed the action.

“We have filed a lawsuit against Lee,” said Song Hee-kyung, head of the agency. “Lee signed a two-year management contract with us in April 2012, but his father suddenly notified us of the cancellation of the contract early last year. Such action was necessary for us because our efforts to recover the relationship with Lee never worked out.”

The source said Lee’s father broke the contract because of a clause that read, “The contract continues for seven years and two months, until June 2019, as it is subject to four extensions of two seasons.” Lee’s father believed the clause violated FIFA regulations, which limit agencies to signing players for a maximum of two years, the source said. He added that he also thought S2 Management didn’t work hard enough to get a sponsorship for his son.

“We even paid a 60 million won bonus when we signed the management contract,” Song said. “It was an anomaly because he was only 14 years old at that time [in 2012]. The reason we included the two-year renewal was because we considered Lee’s age and possible status changes as a football player. Lee was an underage amateur who will turn into an adult professional football player anytime soon.”

She added, “The two-season renewal was made by mutual agreement [with Lee’s father], and we also made a sponsorship contract worth tens of millions of won with a sporting goods company. FIFA banned Lee from official league matches because of a transfer issue that his club needs to resolve with FIFA.”

In 2013, Lee was blocked from playing for Barca following complaints about his international transfer, under which FIFA insists he can’t move to another country to play before the age of 18. After Lee, Korean prospects Paik Seung-ho and Jang Gyeol-hee, both under Barca’s youth team, were blocked as well.

FIFA only sanctions international youth transfers when one of the three following situations apply: the player’s parents move to another country for reasons unrelated to football; the move takes place within the European Union for players aged 16 to 18; or the player’s home is less than 50 kilometers (31.1 miles) from the national border being crossed.

“Even Park Ji-sung and figure skater Kim Yu-na had similar problems when they changed their agencies,” said football analyst Lee yong-soo. “The problem is that people involved in these cases, including agencies, players and their families, don’t take the word ‘contract’ seriously. What I worry about is such fights among adults ruining the futures of young prospects like Lee.”