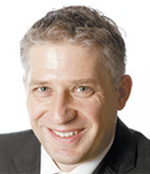 Thomas Geyer, president of the Korean-German Chamber of Commerce and Industry (KGCCI) and president of Vector Korea.

For both Korea and Germany, exports are crucial as a means to foster economic growth as well as employment, given the two countries’ industry structures.

Thus, it is good to see that trade ties between them have turned out to be resilient even in the face of economic difficulties. Korea’s trade relationship with Germany has been affected less by the last economic downturn than that of most other European countries. This is obvious when looking at the data for 2013.

While Korea’s exports to the EU declined 3.8 percent to $36.6 billion in the first three quarters last year, exports to Germany were up 2.7 percent to $5.9 billion during the same period. Imports from Germany to Korea jumped 9.7 percent. The EU is and will remain one of Korea’s main trading partners, both as a source and destination for high-tech products. Germany, as Europe’s biggest economy and Korea’s biggest trade partner within the EU, plays a central role.

German companies also are actively investing in Korea. Examples include BMW, which is building a test driving center in Incheon at a cost of $62 million, the new Siemens Energy Solutions Business Asia headquarters in Seoul, providing up to 500 high-quality jobs, and a new R&D facility by BASF. Mercedes-Benz will invest $70 million over the next three years on construction of an R&D, training and distribution center for automotive parts, and Rittal recently finished building administration offices and a logistics center to better serve clients.

Moreover, many innovative German small and midsize enterprises (SMEs) are already established in Korea or eyeing the Korean market. The Korean-German Chamber of Commerce and Industry helps these companies gain crucial information on Korea and supports their steps toward market entry and, later, expansion - for example through market studies, business partner searches, trade fair services and so on.

Examples of further economic activities involving both countries are vast and might include trade fair participation, educational cooperation and projects in third countries. A number of the plants being constructed by Korean companies in the Middle East, for instance, include parts and machinery produced by German companies. An increase in orders for Korean companies may also thus benefit German businesses and vice versa.

This strong economic relationship reached a milestone in 2011 with the EU-Korea free trade agreement, which decreased tariffs significantly in many sectors and reduced non-tariff barriers. As a result, mutual trade increased significantly and is about to contribute to further positive economic development. While weaker demand led to a decline in Korean exports to Europe in 2012, some important sectors have shown robust growth. Korean exports of cars, machinery, electronic diagnostic devices and tires have fared well and are also showing strong growth. Some growth has also been achieved in other fields such as mobile phones, chemical products and metals. Furthermore, gradual economic recovery since 2011 led to a return toward a positive overall growth trend in Korean exports to Germany in 2013 (2.7 percent).

The relationship between Germany and Korea since the establishment of diplomatic ties 130 years ago, and especially over recent decades, has been and will continue to be a good one. Numerous German companies have invested and founded subsidiaries in Korea. They provide attractive employment opportunities to Koreans and, with their machinery and technology, they actively contribute to Korea’s success.

Still, both countries have much to learn from each other. For example, Germany could use some of Korea’s dynamism. On the other hand, Germany may be a good partner for Korea with regard to efforts by the administration of President Park Geun-hye to strengthen the middle class and SMEs. Similarly, Germany’s experience with a dual vocational training system - recently applied in a number of so-called Meister high schools in Korea - could also be useful.

These and other areas for cooperation are especially interesting in light of President Park’s visit to Germany on Wednesday and Thursday, which could be the impetus for new, stronger and mutually beneficial ties moving forward.