Where penalties are light

Where penalties are light 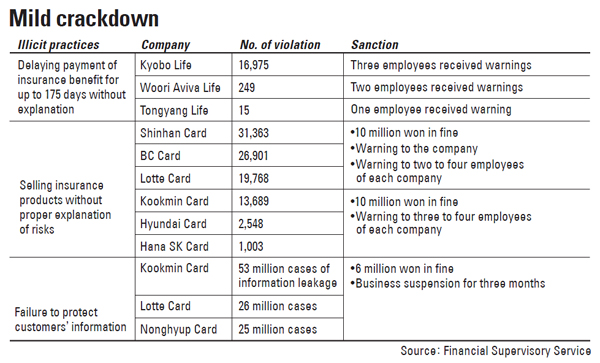 Kyobo Life Insurance, one of the three biggest life insurance companies in Korea, delayed paying benefits by up to 175 days but did not tell customers why or when they would get paid.

Throughout 2012, there were as many as 16,975 cases in which the company delayed payments although it was required to pay within three days - without a special review process - in 98 percent of the cases.

But the Financial Supervisory Service only issued a verbal warning to three employees of the company. That was the lightest punishment the financial watchdog can impose on an insurance company for breaching clause 127-3 of the Insurance Industry Act, which requires insurance companies to pay benefits in due time or explain the reason for the delay.

A penalty can be imposed for violating the act, but it can only apply to board members, auditors or top managers of the company in question, not the company itself.

“Due to the complex nature of insurance products, consumers are often placed in an inferior position in the contract for an insurance product,” said Shin Ki-cheol, a professor at Soongsil University who researches the insurance market. “As for financial companies that are not keeping their promises to consumers, they need to be punished more strongly.”

The situation is little different for credit card companies that sell insurance products as a proxy agency for insurers. Six credit card companies - Shinhan, BC, Kookmin, Lotte, Hana SK, Hyundai - received sanctions this year for irresponsible sales of insurance products. They explained the higher yields of the products but not the extra costs of canceling the services before maturity. The six firms earned more than 13 billion won ($12.06 million) through such sales, but only paid around 10 million won each in penalties under the sanctions.

Irresponsible selling of insurance products is considered more grave than delaying the payout of benefits. If an insurance company is caught, it can be liable to pay up to the equivalent of 20 percent of the insurance premium in a surcharge, as well as up to 50 million won in fines.

But proxy agencies, such as credit card companies, are not subject to the surcharge and are required to pay up to only 10 million won in fines. Proxy sales agencies take 2 percent to 10 percent of the revenue from insurance premiums as a commission.

A massive financial information leak case that involved Kookmin, Nonghyup and Lotte Card brought to light the leniency of the financial watchdogs.

Those credit card companies were charged only 6 million won in penalties plus a three-month-long business suspension for mismanagement of their customers’ personal information. The maximum penalty under the current financial act for such a lapse is 6 million won.