Hyundai has a lot riding on new LF Sonata

Hyundai has a lot riding on new LF Sonata 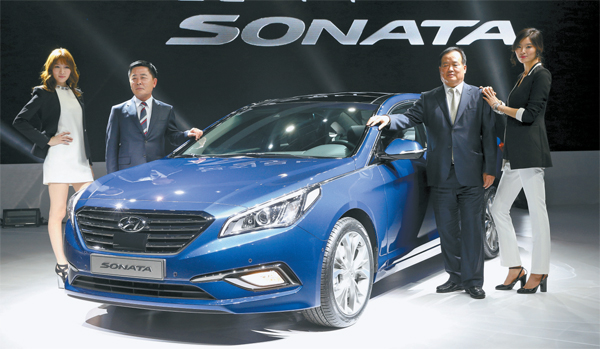 Hyundai Motor yesterday released the seventh generation of its popular Sonata midsize sedan, with enhanced safety features and a goal of selling 228,000 units this year.

The latest Sonata, known as the LF, is the descendant of the first-generation Sonata that debuted in 1985. Nearly 7 million sonatas have been sold.

“If you take out all the complexity of the automobile, in the end it is about design, safety and driving performance, and they were the three keywords for the development” of the LF Sonata, said In Chi-wang, Hyundai’s vice president overseeing product management. “The strengthened body has boosted the crash safety, quietness, and riding comfort of the car.”

Hyundai has emphasized that advanced high-strength steel with tensile strength of more than 60 kilograms (132 pounds) per square millimeter is used in 51 percent of the new Sonata’s structure, enhancing frame strength by 41 percent.

However, with the high-strength steel, the weight of the car increased 45 kilograms (99 pounds), which critics point is contrary to the industry trend toward lighter vehicles for better fuel efficiency.

Hyundai earlier this month corrected the fuel efficiency of the LF Sonata 2.0 edition to 12.1 kilometers per liter (28.4 miles per gallon) from 12.6 kilometers per liter after government certification showed the actual mileage was less than what the company found in its lab.

Although the new fuel efficiency is still better than the previous Sonata’s 11.9 kilometers per liter, Hyundai again apologized for the misleading information and said it has fully explained the situation to customers who have preordered the vehicle. The company has received preorders for 15,000 Sonatas since March 5.

Hyundai aims to sell 228,000 Sonatas worldwide this year and 110,000 more next year. Kwak Jin, Hyundai’s vice president in charge of domestic sales, said the LF Sonata will begin production in the United States starting May, while the company’s Chinese plant will roll out the car in the first half of next year to boost sales in the world’s top auto market.

For the domestic market, where Hyundai is eager to defend its market share against foreign brands, the company said it will beef up marketing to create another boom in a midsize segment that has been on the decline. Korea’s midsize sedan market was 213,000 units last year, more than 30,000 units less than in 2012.

To lure customers, Hyundai will hold a Sonata Motor Show at COEX through Sunday to showcase the history of the model, displaying all seven generations of the Sonatas and offering free support for its Blue Link infotainment system for life to 1,000 LF Sonata buyers.

The LF Sonata with a 2.4-liter Theta engine will have two trim levels priced at 23.95 million won and 29.9 million won.

“It is true the price has gone up about 450,000 won to 750,000 won compared to the previous edition, but considering that the new Sonata has upgraded features, the real value of the car is actually offered at a lower price to consumers,” Kwak said.

Hyundai said it is considering introducing a hybrid version of the LF Sonata in the near future and is also looking into developing a diesel version.

The company added that it is also developing turbo engine in line with the engine downsizing trend in the industry and that it will install it in the midsize sedan.

Hyundai said the release of the new Sonata signals a new beginning for the company that has suffered some damage to its brand image after a inflated fuel efficiency issue in the United States and quality problems with water leaking in some of its vehicles.

“Labor problems and some quality problems have made us lose customers’ trust and we thought a lot about it,” said Hyundai Motor CEO Kim. “We will take a more detailed approach with better strategy and marketing so that those kinds of problems will never happen again.”