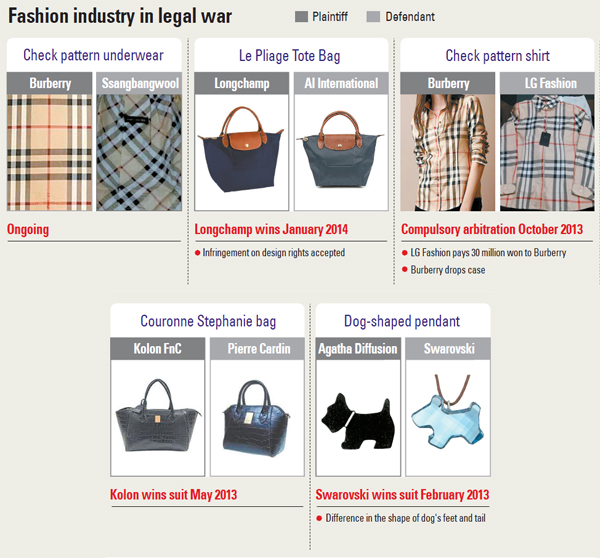 While the Burberry-Ssang Bang Wool case is still ongoing, there are other examples of brands suing for trademark infringement.

Five months before it sued Ssang Bang Wool, Burberry sued LG Fashion’s DAKS brand for using the same plaid pattern on shirts. The case ended after arbitration and a payment by LG Fashion of 30 million won.

Last May, Kolon FnC won a case in which it filed for an injunction against Pierre Cardin to ban sales of its V4V bag. Kolon claimed that Pierre Cardin’s bag copied its own Couronne Stephanie Bag.

But in some cases, courts favor the defendants because proving a design rip-off isn’t clear cut.

The lawsuits in the fashion industry show there is a thin line between an imitation and trend.

“Every spring and fall, designers from all over the world gather at venues where the big four fashion shows are held and it is usually the case that they [come up with designs] based on trends unveiled at the fashion shows and according to each market’s conditions,” said an industry official.

In the past, the local fashion industry’s copying of designs was an open secret. Local designers copied designs after attending fashion shows in Japan and Europe and introduced similar apparels in their own brands. Designers in the Dongdaemun section of Seoul would then copy the items and sell them at cheaper prices.

Copying wasn’t considered a big taboo. There was also a saying that if a certain design became a copied item at Dongdaemun market, the design was successful.

But with the local fashion industry growing and maturing, global brands are taking notice of Korean brands and what they produce.

In the past, global brands concentrated on Japan when it came to the local market. But now, many popular brands are making inroads in the Korean market.

“It looks like global brands want to increase their brand power in the Korean market by giving warnings about copying,” said another industry official. Insiders say the global brands aren’t trying to score big settlements in the courts, but they do want to protect their designs.

A problem arises when it comes to deciding trademark infringement.

“It is very difficult to set a clear standard like a mathematical formula when it comes to trademarks and designs,” said Lee Jong-suk, an attorney at Lee & Ko. “Even for brands, it is very difficult for them to prove uniqueness in their trademarks. The process is very complicated.”