[Sponsored Report] Nonghyup Bank plans to tighten its IT system

[Sponsored Report] Nonghyup Bank plans to tighten its IT system 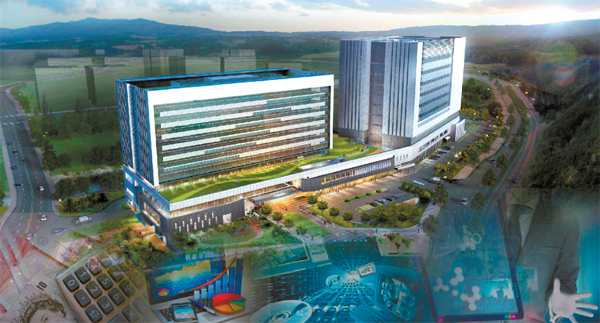 A computerized image showing the new Nonghyup IT center in Uiwang, Gyeonggi. Provided by the company

In the wake of recent large-scale customer information leaks by banking and communications companies in Korea, Nonghyup Bank (NH) aims to improve its IT security facilities.

In addition to protecting the bank from hacking, the new initiative will eliminate data-related accidents that have caused some trouble for NH customers in the past.

A total 760 billion won ($704.36 million) will be ploughed into refining the company’s entire data system.

Of this, 100 billion won will be used to reinforce data systems in each NH branch. Internal and external networks will be separated, restoration systems will be improved and higher connection controls will be put into place to block hackers.

Personal data protection will also be strengthened by storing and managing data in an IT center rather than at individual bank branches.

In addition, NH plans to use 200 billion won to separate its data processing system from its mutual finance business, while 140 billion won will be spent on splitting NH from its affiliated insurance company. Combined data management, which allowed a series of hacking incidents in the past, will be eradicated.

The separation, which NH hopes to complete by 2017, will improve transaction delays and the time it takes to restore the company’s systems after cyberattacks.

NH has already begun to tighten its security. On March 1, the bank established an information security department, an exclusive office for protecting customers’ personal data.

Nam Seung-woo, the former chief of Shinhan Bank’s IT unit, will take charge of the department, which will act as the headquarters for all of NH branches’ security business. It will also search for and educate security experts.

A 320 billion won budget has been set aside for the construction of a new IT center for the bank in Uiwang, Gyeonggi, too. The facility will consist of two buildings with 12 floors each and is projected to be 4.1 times the size of the former NH IT center in Yangjae-dong, southern Seoul. It will be the largest IT center of its kind among Korean banking companies.

The hub will contain a self-powered maintenance system that can endure a blackout, a vibration-isolating structure to avoid damage from earthquakes and a multi-level security system. It will operate from 2016.

“The high-tech IT center will stabilize the bank data system and allow the best financial services to customers,” said an NH official, adding that the new security blockade will guarantee absolute protection for personal data from hacking or malignant code attacks.