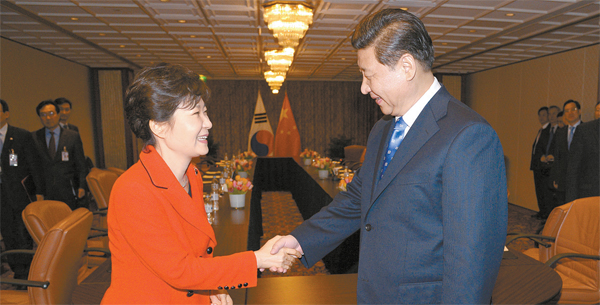 Korean President Park Geun-hye, left, shakes hands with Chinese President Xi Jinping, right, in a hotel in Amsterdam on Sunday before a bilateral summit on the sidelines of the Nuclear Security Summit at The Hague. [Joint Press Corps]

THE HAGUE - President Park Geun-hye and Chinese President Xi Jinping vowed in a summit here on Sunday to step up “communication and cooperation” toward peace on the Korean Peninsula and North Korea’s denuclearization, reaffirming their common stance on the North.

Park used the summit as a chance to ask the leader of China, as well as U.S. President Barack Obama, for progress on the North Korea issue. Her remarks raise the specter that six-party talks that have been in abeyance for five years and three months may be resumed.

Analysts expected the issue to arise during the three-way talk among Park, Obama and Japanese Prime Minister Shinzo Abe on Tuesday.

“The North Korean policy of achieving both nuclear development and economic prosperity is impossible,” Park said Sunday. “South Korea has kept open the door for conversation with North Korea, but there should be substantial progress in [the North’s] denuclearization. Even though there has not been much progress in discussions about the North Korean nuclear issue among chief negotiators of the six-party talks, achieving substantial progress in denuclearization is guaranteed, and we may seek various measures concerning resumption of talks.” Park also asked chief negotiators of Korea, China and the United States to make more effort.

Park’s comments reflected a change of attitude about resuming six-party talks. Last time she had a one-on-one meeting with Xi, in October in Bali, Indonesia, she said North Korea’s “sincere measures” were a prerequisite for a resumption of the talks.

Xi said Sunday that he agrees with South Korea, stressing that China “clearly objects to North Korea’s nuclear possession” and is trying to maneuver North Korea in the direction international society wants it to take. Xi also showed strong support for the trust-building process initiated by Park and for the peaceful unification of the Korean Peninsula.

Park, who arrived in the Netherlands later in the afternoon on Sunday, chose the summit with China - her fourth since she took office in February 2013 - as the first official event of her seven-day trip to Europe. She headed to the hotel in Amsterdam where Xi was staying, in reciprocation for his visit to Park’s residence five months earlier when they last had a summit.

Park tends to send messages through the color of her outfit during political events. She visited Xi in a red jacket to express courtesy to the Chinese president and to acknowledge that ties between South Korea and China have rarely been closer.

Xi said he was “very pleased” that both countries had productive bilateral and multilateral meetings last year and that many agreements have been carried out smoothly. He expressed gratitude to Park for an event set to take place in a few days at Incheon International Airport in which the remains of soldiers of the Chinese People’s Volunteer Army during the 1950-53 Korean War will be repatriated.

“I hope the return of the remains would further deepen the fraternal cooperation of the two countries,” said Park in return.

The summit had originally been scheduled to last half an hour, but the length was doubled.

“I am meeting with you for a fourth time since I visited China last year, which I believe demonstrates well that the two countries are being reborn into strategic partners in a true sense,” Park said.

The two leaders also agreed to step up efforts to conclude a free trade agreement (FTA) by the end of this year. There have been 10 rounds of negotiations over the FTA, but the tug-of-war has continued due to conflicting interests. The 10th round took place from March 17 till March 21.

“Forging an FTA will be beneficial to both countries and will help both grab leadership in economic cooperation in the region,” Xi was quoted as saying by Blue House spokesman Min Kyung-wook. Another Blue House official said the Chinese President expressed his hope that the FTA is finalized before the Asia-Pacific Economic Cooperation (APEC) summit scheduled for November in Beijing.

Park and Xi are attending the third edition of the Nuclear Security Summit with the participation of leaders from 51 other countries and four major international organizations, including the United Nations and the International Atomic Energy Agency (IAEA). The two-day security summit kicked off Monday afternoon.

Meanwhile, in an exclusive interview with NOS, the largest Dutch public TV station, aired on Friday and released in Korean Sunday, Park said she thinks it could pose a huge threat to not only the Korean Peninsula but also Northeast Asia and the world if North Korean leader Kim Jong-un possessed highly enriched uranium.

“North Korea may transfer the nuclear materials to another country and the transferred materials may be used for terrorism,” she said. “Yongbyon [a North Korean city 80 kilometers (49.7 miles) north of Pyongyang] has so many nuclear facilities that even a fire in a single building may lead to an even more hazardous disaster than the one in Chernobyl.”

The president stressed that international society should cooperate to send out a clear message that if North Korea makes the “right choice,” it would help its economic development.

The Dutch reporter asked about South Korea’s National Assembly failing to pass a revised bill on the physical protection of nuclear material and facilities, a prerequisite for Korea to ratify treaties to protect nuclear material and suppress nuclear terrorism. Since Korea has demanded other countries get rid of radioactive materials and nuclear weapons, this could be an embarrassment for President Park, the reporter said.

“There are political difficulties, but there have been achievements since the summit in Seoul,” Park replied.