NIS agent tries to take his own life

NIS agent tries to take his own life 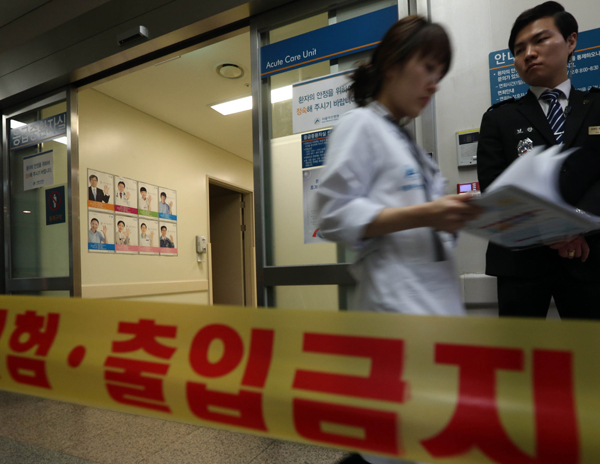 A security guard stands at the gate to the intensive care unit of Asan Medical Center in Seoul where an NIS agent who attempted to commit suicide was hospitalized yesterday. By Kang Jung-hyun

A National Intelligence Service agent attempted suicide over the weekend following an interrogation by prosecutors over the fabrication of key documents provided by the nation’s top spy agency in an espionage case, authorities confirmed.

According to local police, a 51-year-old agent, surnamed Kwon, was found in a parked car in Hanam, Gyeonggi, around 1:30 p.m. on Saturday with a burnt charcoal briquette and a suicide note.

When a woman whose car was parked behind Kwon’s approached him to ask him to move, she found the vehicle filled with smoke.

Kwon was immediately taken to a hospital by a 119 rescue squad and is reportedly in a coma and under NIS protection.

The incident has once again disrupted an ongoing investigation by the prosecution into allegations that the NIS had a hand in manipulating the immigration records presented in the appeals case against Yu Wu-seong, a Korean-Chinese man living in Seoul who is suspected of giving Pyongyang information on more than 200 North Korean defectors in the South.

All the other agents who were questioned in the probe last week have denied having any connection to the scandal.

In the note Kwon left to his family, the agent reportedly wrote: “Our NIS has been crippled by this case due to pro-North Korean forces and the Lawyers of a Democratic Society [who are Yu’s attorneys]. We lost in the war on espionage against North Korea.”

A day before his suicide attempt, Kwon allegedly told his co-workers: “I have dedicated 27 years of my life to working on espionage cases against North Korea for the country, but the reality - accusing me of fabrication - is so frustrating. I will tell the truth to the public even in staking my own life.”

Kwon’s brother-in-law apparently told police that Kwon had asked him around 7:30 p.m. on Friday to borrow his car, claiming he wanted to take a break at a jjimjilbang, a Korean-style public sauna. Prosecutors said the agent left the Seoul Central Prosecutors’ Office in the middle of the questioning for a break.

The Dong-A Ilbo reported yesterday that he also met with one of its reporters around 11:30 p.m.

Kwon apparently said that he “could not bear the questioning anymore” and that the interrogation by prosecutors was “humiliating” and “rude.” He added that the prosecution was “pushing this case too much.”

“It was the prosecution [in the appeals case against Yu] that initially asked us to obtain the documents, but now they are blaming the NIS for all responsibility,” he told the newspaper. “During the prosecution’s questioning [in the fabrication], I suffered a variety of humiliations.”

“After this case, all of our brokers in China have been disconnected with us,” he continued. “This is a win-win project for North Korea and China - to kill the NIS through the Korean prosecution.”

Yu, the suspect in the case, a Chinese national who is ethnically Korean, came to South Korea in 2004 under the guise of being a North Korean defector.

He was alleged to have leaked information on defectors living in Seoul to the regime but was acquitted of those charges in a trial last year after prosecutors failed to submit substantial evidence to prove he visited North Korea for espionage activity.

The prosecution, however, appealed the case, and a second trial is currently ongoing.

The NIS came under fire after the Chinese Embassy in Seoul confirmed that the three documents given to the prosecution in the appeals case by its agents were fabricated.

Yu was alleged to have visited North Korea twice in 2006 via China, between May 23 and May 27, and May 27 and June 10. He admitted to taking the first trip, saying he went to North Korea to attend his mother’s funeral.

Howevere, he has maintained that he did not take a second trip.

The three documents in question include the entry and exit records for Yu’s second trip between China and North Korea in 2006, and two confirmation letters for those records in the name of the Helong police station in China and the Sanhe immigration office, respectively.

Like the other NIS agents, Kwon argued that the NIS agents did not know the documents provided by local brokers in China had been fabricated.

However, a broker who obtained one of the documents told prosecutors recently that the NIS had been aware of the fabrication when they received it.

According to the NIS and the prosecution, Kwon started working in February as the vice-consul at the Korean Consulate General in Shenyang.

On Wednesday, he was called in for questioning in Seoul over the fabrication scandal and was ruled a suspect.

The prosecution suspected that he may have directed another NIS agent in the consulate to fabricate a confirmation letter for the immigration records.

The prosecution reportedly suspected that Kwon had also been directed from a superior in Seoul to do so, and asked him a series of questions concerning the identity of the primary authority in the scandal.

As of Wednesday, Kwon had gone through a total of 30 hours of questioning before he abruptly left the prosecutors’ office Friday after a heated altercation with prosecutors.

The prosecution apparently did not have an arrest warrant to detain Kwon and were legally unable to prevent him from leaving.

Kwon promised to return at 10 a.m. on Sunday, the prosecution said.

“We highly honor the dedication and sacrifice of the spy agents who are working on espionage cases against North Korea, and we have no intention of hurting [their pride.]

“We are also currently [investigating] the prosecutors who were in charge of questioning [Kwon]. We will reveal the truth as soon as possible regarding the processes of the investigation,” Yun Gap-geun, a senior prosecutor in charge of the case, said yesterday in a statement.