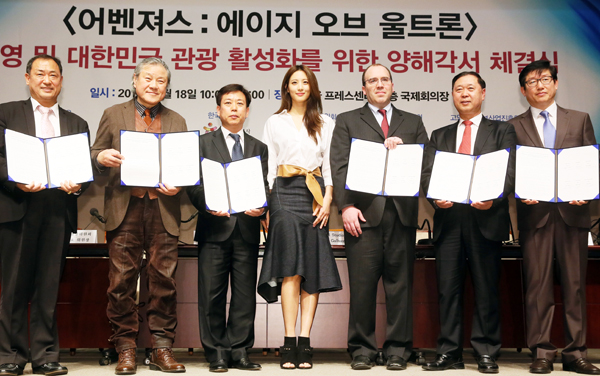 An MOU signing ceremony at the Seoul Press Center last week, for the agreement to shoot part of “Avengers: Age of Ultron” in Korea. [STAR NEWS/NEWS1] 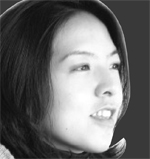 I suddenly started worrying about the scheduled filming of the American fantasy-action film “Avengers: Age of Ultron” (or “Avengers 2”) in Seoul when I saw a photograph. It was an archetypal photo of an MOU signing ceremony, Korean style. (Such photos are the most deadening kind of photos clogging up our newspapers, with the exception of photos of politicians shaking hands.) Officials of the Korea Film Council, the Korea Tourism Organization and other related organizations stood in dark suits and in a line. Behind them was a big banner, an indispensable element of Korean MOU ceremony photos. It read: “Memorandum of Understanding for Filming of ‘Avengers: Age of Ultron’ and Promotion of Tourism in Korea.”

The laughably solemn photo suggested that the related authorities have overestimated the promotional impact of the filming of a Hollywood blockbuster in Korea and would appear to be overly complacent with the deal. If you overestimate the benefits in a cost-benefit analysis, you can easily become overly generous with expenses. That worried me. Then fears became a reality when I heard that the Korean authorities would refund 30 percent of the filming costs in Korea to Marvel Studios - in cash. In addition, the authorities unveiled a plan to suspend traffic on several main arteries in Seoul for the filming next month.

The authorities explained that the costs would be offset by an increase in the annual number of foreign tourists to Korea, with an additional 620,000 people coming to Korea due to the promotional benefits of “Avengers 2” - a really rosy estimate. The authorities said the movie would help improve Korea’s national image, as the producers agreed in the MOU to portray Korea as a cutting-edge IT country.

Well, it is true that many countries offer subsidies for location filming as movies can promote the place in which they are set and contribute to tourism. But the promotional effect is determined not merely by the popularity of a movie but by its genre.

The most tourist-drawing genre is romance. People who saw “Roman Holiday” want to enjoy gelato on the Spanish Steps in Rome, just like Audrey Hepburn. Fans of “Mamma Mia” would like to climb the white steps of an island in Greece and appreciate the blue sea. Other popular genres are spy flicks, like the James Bond and Mission Impossible series, which tend to be set in the most stylish or exotic places around the world, and history-related thrillers, such as “The Da Vinci Code,” which deals with cultural heritage properties.

But when it comes to sci-fi and fantasy, it is a different story. In the fantasy genre, “The Lord of the Rings” series drew tourists to New Zealand but that was an exception thanks to the spectacular natural scenery featured in the film. When a metropolitan city becomes a backdrop of a sci-fi fantasy movie, it often provides a backdrop for a lot of explosions and destruction. Will that inspire audiences to visit the city? In addition, a lot of moviegoers never even figure out that the cities in sci-fi fantasies are real locations that they can visit - and that haven’t been blown up or otherwise destroyed.

Last year’s blockbuster “Pacific Rim” was a notable case. As Seoul aspires to become in “Avengers 2,” Hong Kong appears in the film as a futuristic city full of splendid skyscrapers. A lot of them fail to survive the action. How many in the audience would think, “Oh, I’d love to visit that stylish skyline demolished during the fight between the gigantic robot and the monster! Come on honey! Let’s go!”

I asked a few friends who had watched “Pacific Rim” if the movie made them want to visit Hong Kong. All were skeptical. One said, “Was that Hong Kong? I thought it was a virtual city in the future.”

I am worried that’s what foreign audiences may feel after watching “Avengers 2.” The Korean authorities could try to get around that problem, as, according to the MOU, Korea is allowed to use some footage from the film in national promotional campaigns.

But I am skeptical that the same people who distributed that outdated photograph from the signing of the MOU are capable of a sophisticated promotional campaign for Korea using “Avengers 2.” If Korea hopes to be projected as “a stylish high-tech nation” in the film, the MOU signing event should have reflected that image as well.

Perhaps “Avengers: Age of Ultron” will be a breakthrough that attracts other foreign film productions that will truly help tourism. Still, I am concerned about the mindset of Korean authorities who overestimate the benefits of such a deal and are actually unable to exploit such worldwide publicity.

*The author is the culture desk chief of the Korea JoongAng Daily.