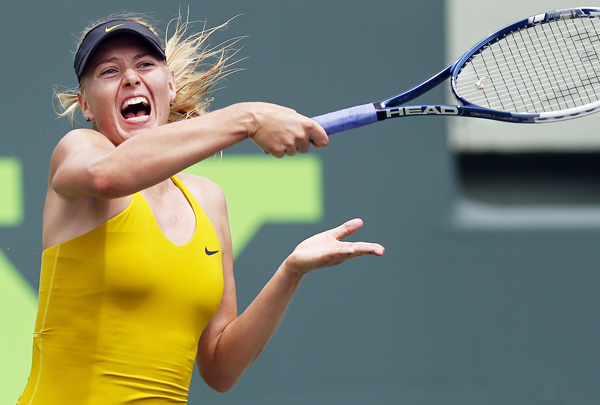 Maria Sharapova hits a forehand on day eight of the Sony Open at Crandon Park Tennis Center on Monday.[USA TODAY/NEWS1]

While Williams and Sharapova clashed in last year’s final, there will be no championship rematch on Saturday at Crandon Park with the American and Russian on the same side of the draw and closing in on a semi-final showdown.

After getting her title defence off to a slow start world No. 1 Williams, who lives an hour’s drive from the Crandon Park Tennis Center and considers the event her home tournament, stepped it up a gear against Coco Vandeweghe sweeping past the young American qualifier 6-3 6-1 in 79 minutes.

Fourth seed Sharapova got a much-needed wake-up call after sleep-walking her way through the opening set of her match before dispatching Belgian Kirsten Flipkens 3-6 6-4 6-1.

Williams, a minority owner of the National Football League’s Miami Dolphins, once again stepped onto the court dressed in her team’s turquoise and orange colors and kicked off the match by claiming the only break of the opening set for the early lead.

In the second set, Williams simply blitzed Vandeweghe, overpowering the 22-year-old who managed to hold her serve just once against the 17-times grand-slam winner.

Sharapova, playing the first match of the day on a drowsy and overcast centre court, appeared to have trouble getting up for her fourth-round contest, as did many of the ticket holders with only a few hundred spectators sprinkled across the quiet stadium as play began.

“I started off .?.?. probably looked like it was too early,” Sharapova told reporters. “I usually like playing first match on, but I didn’t start off the way I wanted to.

“Nothing was working. Just the way it went in the beginning.”

Flipkens certainly came ready to play and broke a misfiring Sharapova at the first opportunity and again to go up 4-0 with the help of back-to-back double faults from the Russian. In the second set, a suddenly alert and focused Sharapova turned the tables on the 19th seeded Belgian as she raced in front 4-0 on a pair of breaks on way to leveling the match. Trailing 3-1 in the third set, Flipkens had a glorious opportunity to get back into the contest after going up 0-40 on Sharapova’s serve but was unable to convert on any of her four break chances.