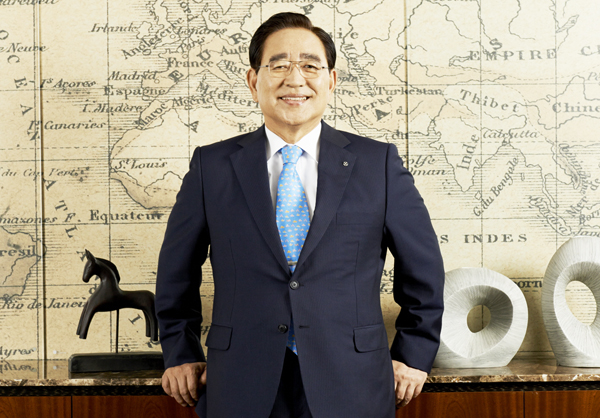 Shinhan Financial Group has kept its position as an industry leader since 2008, despite the overall decline of the domestic financial industry. Today, Chairman Han Dong-woo begins his second term, three years after becoming head of the company.

In 2011, Chairman Han took office during the worst management crisis in the history of the group, after allegations made by former executives shook the company from the inside and out. Han displayed strong leadership by leading an in-depth reform throughout Shinhan, improving its governance structure, creating a management succession program and allowing employees to share ideas on management at conferences.

Han also created new business sectors to provide integrated financial services and introduced a set of fair, merit-based processes for promoting staff. These transformative measures led Shinhan to normalize its management structure and restore the trust of clients and shareholders in a short period of time.

The group’s improvements have been recognized overseas as well. Shinhan was selected as the best Korean bank and was rated 43rd in the world by The Banker magazine in February. Its global ranking has climbed up continuously; from 57th in 2012 and 51st last year to 43rd this year. The company is now planning its next leap forward as Chairman Han’s second term unfolds.

First, he vowed to internalize the features of compassionate finance, acknowledging that the concept has not yet completely permeated the daily business of employees.

Second, he is promoting creative finance to increase the rate of return for asset management. Han wants to diversify methods of asset management because the focus of finance is now on management rather than procurement in an era of low growth.

The third strategy is to develop innovative pension products. By providing practical solutions for customers’ retirement needs, Shinhan aims to contribute to solving challenges of an aging society.

Han also stressed globalization and entry into new markets by using different strategies such as creating bespoke portfolios for clients. The goal of creating better ways of communicating with customers by using new technologies such as social media channels was also emphasized.

Ways of saving costs while maintaining a high level of customer satisfaction are being discussed, too.

“Getting to the top is no longer the biggest issue,” said Han Dong-Woo. “The important thing is to become a pioneer and find creative new ways to get to the top.”

Industry watchers are paying close attention to how Han will take compassionate finance to the next level.