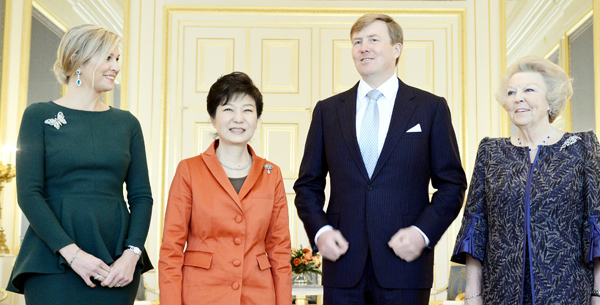 THE HAGUE - President Park Geun-hye did not attend the official banquet hosted by Dutch King Willem-Alexander on Monday evening due to a minor illness, the Blue House said.

Missing a scheduled event during an overseas trip is unprecedented for Park.

“Since the president felt like she had [a little bit of a cold], Foreign Affairs Minister Yun Byung-se attended on her behalf,” Blue House spokesman Min Kyung-wook said in a briefing here.

“She did not sleep well inside the plane, and she neither slept well yesterday nor today. … She has schedules tomorrow, including multilateral talks with the United States and Japan.”

But he noted cautiously that the fact that Park is feeling sick should not be considered too much of a concern.

“We disclosed it because [we did not want the press] to assume she was seriously ill or something if we concealed the reason,” Min said.

The president’s schedule was packed during the day - as is typical on state visits. She started the day with a meeting in the morning with Dutch Prime Minister Mark Rutter, and the two vowed to step up cooperation in the agricultural, medical, nuclear and energy fields.

They also signed a memorandum of understanding (MOU) to allow youths from each country to obtain one-year working holiday visas, which will go into effect in June.

Park Ji-sung, who currently plays as a midfielder for the Dutch football club PSV Eindhoven, and the team’s manager, Guus Hiddink, who led the Korean team from 2000 until 2002 and was integral in helping Korea reach the 2002 FIFA World Cup semifinals, also attended the lunch between President Park and King Willem-Alexander.

The Dutch government gave the president VIP treatment, especially since Korea was the host nation of the previous nuclear summit in 2012.

Park also rode in an armored BMW M7 sedan. According to Lee Key-cheol, Korea’s ambassador to the Netherlands, the Dutch government provided bullet-proof cars to the leaders of the six nations, including the United States, Britain and Israel - countries whose leaders have a higher likelihood of being targets of terrorism.

The last time President Park visited the Netherlands was in 2011, when she was sent as a special presidential envoy to celebrate the 50th anniversary of diplomatic relations between the two countries.

The Netherlands is the largest direct investor to Korea among European Union nations and the world’s third-largest investor, trailing the United States and Japan.