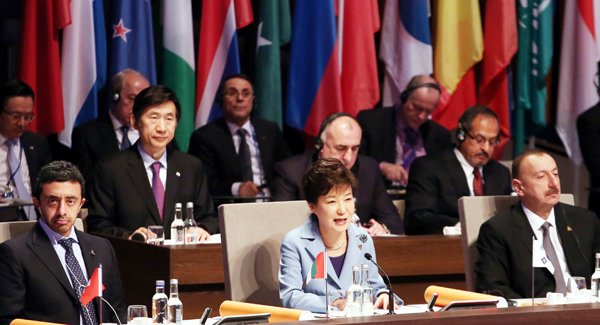 South Korea’s President Park Geun-hye delivers her speech during the opening session of the Nuclear Security Summit in The Hague on Monday.[NEWSIS]

THE HAGUE - President Park Geun-hye stressed in a keynote speech at the opening ceremony of the third Nuclear Security Summit Monday afternoon that the Korean Peninsula should be the starting point for the world to realize a goal of “no nuclear weapons.”

“I believe that as long as North Korea remains a nuclear challenge, a world without nuclear weapons will not come,” she said during the address as the leader of the host country of the summit’s previous edition, which was held two years ago in Seoul.

“And so it has been my long-held conviction that the journey toward a world without nuclear weapons should start from the Korean Peninsula. I look forward to working with everyone here to make that vision a reality.”

Her speech was immediately followed by a warning from North Korea. Pyongyang’s deputy United Nations Ambassador Ri Tong-il said at a news conference Monday in New York that as long as the United States continues “nuclear blackmail,” Pyongyang will continue to take “additional measures” to demonstrate the power of a defensive nuclear deterrent. Although Ri did not specify what the additional measures would be, he seemed to be suggesting a fourth nuclear weapons test.

Ri also said the North’s nuclear weapons are not a “political bargaining chip.”

Citing a recent report by an international research institute, President Park also noted in her speech the potential dangers posed by the Yongbyon nuclear facility in North Korea.

She mentioned Yongbyon’s risks during an exclusive interview released on March 21 with a Dutch television network.

“North Korea’s Yongbyon is home to such a dense concentration of nuclear facilities that a fire in a single building could lead to a disaster potentially worse than Chernobyl, according to the report,” she said.

“By any measure - whether non-proliferation, nuclear security or safety - North Korea’s nuclear programs are cause for enormous concern. The peace and security of the world demand no less than their dismantlement.”

However, some other experts later refuted the theory, arguing that the reactors in Yongbyon and Chernobyl are different in scale and structure.

Three-way talks between Park, U.S. President Barack Obama and Japanese Prime Minister Shinzo Abe were set to take place Tuesday evening on the sidelines of the Nuclear Security Summit. This will be the first time for the three leaders to meet together and the first time that Park and Abe talk at all. Park had previously declined Abe’s pleas for a summit because of his government’s intransigence on territorial and historical issues involving Japan’s misdeeds.

“The majority of the topics to be tabled at the summit will be assigned to North Korean nuclear issues,” said a Blue House official.

The three-way meeting will focus on dealing with North Korea’s nuclear program and the threat of proliferation in the region, Japan’s Foreign Ministry said in an emailed statement.

The three leaders are also forecast to discuss resumption of the long-stalled six-nation talks on denuclearization of the Korean Peninsula.

In a meeting Monday with President Obama, on the sidelines of the nuclear summit, Chinese President Xi Jinping called for six-party talks to resume as soon as possible, according to China’s state-run Xinhua News Agency.