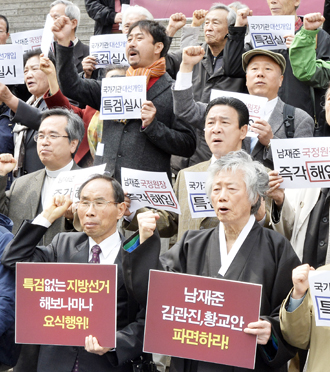 Activists hold a demonstration yesterday by the Sejong Center for the Performing Arts in Seoul to denounce the NIS for meddling in a spy case.[NEWS1]

The man claimed in a suicide note that he felt pressured during a questioning session on Friday by the prosecution, which is currently carrying out an investigation into the fabrication of key evidence submitted in an espionage case.

A 51-year-old veteran spy agent, surnamed Kwon, attempted to take his own life on Saturday after a 30-hour interrogation over whether he was involved in the fabrication of three documents involving the immigration records of a North Korean-Chinese man who is suspected of spying on South Korea for Pyongyang.

Kwon was discovered in a parked car on Saturday in Hanam, Gyeonggi, with a burnt charcoal briquette and a nine-page suicide note. He was immediately transported to a hospital, where he has been in a coma ever since.

In the note, Kwon denounced the prosecution, saying they had damaged his pride as a spy agent and were “pushing too much” with the probe in order to “kill” the NIS.

The prosecution yesterday was scheduled to call in a third-level NIS official who was Kwon’s direct superior, but scrapped the plan, apparently in response to the suicide attempt.

It has not yet been determined when the interrogation will resume. The prosecution is also considering minimizing additional questioning for other NIS agents, sources told JTBC yesterday.

The prosecutors’ focus in the ongoing probe now is to find out who was ultimately responsible for the fabrication of the evidence and how many high-ranking NIS officials were involved in the falsification of the documents.

According to NIS hierarchy, Kwon may have reported the fabrication to at least four of his high-level superiors, the prosecution believes - possibly including NIS chief Nam Jae-joon.

In light of the suicide attempt, the prosecution is expected to delay its plan to announce the outcome of the investigation at the end of this month.

Kwon, who worked at the Korean Consulate General in Shenyang, China, is one of the NIS agents suspected of being involved in the fabrication of three documents concerning the North Korean-Chinese man Yu Wu-seon.

Yu, the suspect in the case, is an ethnically Korean-Chinese national who came to South Korea in 2004 under the guise of being a North Korean defector.

He was alleged to have leaked information on hundreds of defectors living in Seoul to the regime but was acquitted of those charges in a trial last year after prosecutors failed to submit substantial evidence to prove he visited North Korea for espionage activity.

The prosecution, however, appealed the case, and a second trial is currently ongoing.

He admitted to the first trip, claiming he went to North Korea to attend his mother’s funeral, though he has consistently denied the second one.

The NIS came under fire after the Chinese Embassy in Seoul confirmed that three documents given to the prosecution in the appeals case by its agents were fabricated: the entry and exit records for Yu’s second trip between China and North Korea in 2006, and two confirmation letters for those records in the name of the Helong police station in China and the Sanhe immigration office, respectively.

The NIS claimed all of the three documents were handed over by three respective outsourced brokers in China and further argued that the agents were unaware of the fabricated material when they received them.

On March 5, one of the brokers in the case, a 61-year-old man only identified by his surname Kim, also attempted suicide amid questioning by the prosecution.

In his suicide note, Kim implicated the spy agency in the fabrication scandal and admitted at a questioning by the prosecution earlier this month that the NIS was aware that the document he gave to them had already been falsified.

Since the scandal was reported, two other brokers have been disconnected with the NIS.