Documenting Kabukicho, in the open and alone

Documenting Kabukicho, in the open and alone 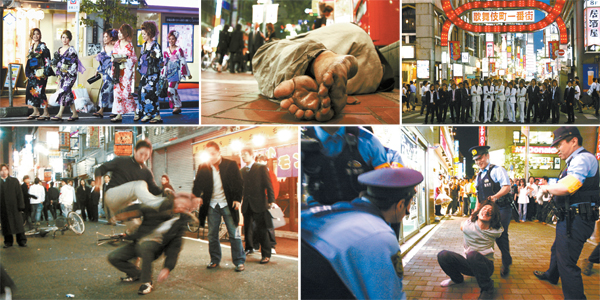 Upper left to right: Clad in colorful yukata, Japanese hostesses head to their workplaces in Kabukicho. The feet of a homeless man lying under neon lights. Young male hosts lure in guests to their bars. Lower left to right: Gangsters in a fight. Police apprehending a vagabond. Provided by Kwon Cho

On a sultry night in August 2008, the Korean photographer Kwon Chol was running through the streets of Kabukicho, Tokyo, anxious to be the first to arrive at a disturbance up ahead. Beating the police, Kwon started taking photos of the bloody scene - a Japanese woman whose face had been flayed by a knife.

“After that accident, a series of hate crimes broke out in so many parts of Japan,” recalled the photographer. “But what worried me more than who did it was the fact that some of the people on the scene seemed to be undisturbed by the horrible incident. Young male bar hosts were taking selfies on the blood red street. I was enraged at them.”

Kwon started taking pictures in Kabukicho, a famous red-light district in Tokyo, in 1996. Every night, the area becomes a chaotic mix of prostitutes, drunks, gangsters and police officers. As Kwon’s recent photo collection “Kabukicho” won the photography prize at the 2013 Kodansha Publishing Awards, the JoongAng Ilbo sat down with the 47-year-old photographer.

Q. What is so special about Kabukicho?

A. In Kabukicho, no one can escape from revealing their true nature. The town never sleeps. You can buy a person if you want, and sell yourself, too. I think life in Kabukicho resembles a ruthless battlefield; every night, people continue to struggle and fight there. Kabukicho symbolizes today’s Japanese society. It’s where people express their relentless desire and natural instincts like nowhere else. Over the years, I have documented life in Kabukicho with an unbiased lens.

In addition, Korean-Japanese people have had a long history with Kabukicho. During the postwar era, many Zainichi [Korean-Japanese people living in Japan] formed their own community in this area, opening local stores like pachinko parlors and bulgogi restaurants. Yet life wasn’t always rosy there. When the Japanese government was preparing for their first summer Olympics in 1964, a number of Zainichi people were evicted to Edagawa in Kochi Prefecture under the cause of “purifying” the capital city. At that time, Edagawa was just a huge landfill - but the Koreans had no choice but to move there. They suddenly lost their homes, schools and workplaces. Nevertheless, the 21st century marked a turning point in Zainichi society. In 2002, Korean-Japanese people filled the streets with red shirts, cheering for their motherland [in the FIFA World Cup]. And Shin-Okubo, the Koreatown in Tokyo, is in the neighborhood of Kabukicho.

Tell me about your daily routine in Kabukicho. Do you go there every day?

That’s true. Actually I take my camera there almost every day, then I work all night taking photos of the streets on Friday and Saturday nights. To capture as many people as possible, I walk about 20 kilometers [12.4 miles] every night. The most important thing to remember when taking photos is to get to the scene as fast as you can. That’s why I live in a room near Kabukicho, which is barely five minutes from the area. When I go to bed, I place my camera by my pillow so that I can pick it up and run into the streets when an incident occurs. To keep in shape, I regularly swim during my free time.

Isn’t it very dangerous to take photos of Yakuza gangsters on the streets?

I had been detained by gangsters for trying to take close photos of them on the streets. Some other gangsters approached me and said they would “protect” me if I paid them money regularly. Of course I refused such a proposal. I believe journalists should remain free of ties and never compromise with such groups.

Do you remember any episodes from the old days?

Definitely. One day, I received a call from a gang inquiring whether I had taken pictures of their boss fighting fiercely on the Kabukicho streets.

The man ordered me to send some of my photos to their office. Of course that was out of the question, but then they forced me to go to their office. I was taken aback by the famous finger-cutting tool on the desk. But my horror did not last long. Actually, the reason they asked me for the photo was to help their boss in prison. They said their boss needed the picture to prove how big he was in the outside world, to his cellmates in the jail. I couldn’t do anything but burst out laughing. 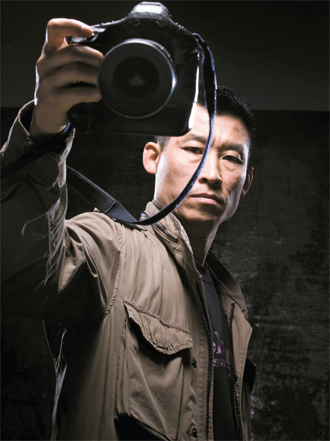 You must not be the only photographer capturing the nightlife of Kabukicho.

There are some people who take snapshots of the brothels and paparazzi for the famous people. But, unlike me, they are almost always undercover. As I have taken pictures for more than a decade in that area, many yakuza are not as hostile as they were years ago. Some guys sporting huge tattoos on their bodies even ask me to take pictures of them.

What does it mean to be a Korean photographer in the heart of Tokyo?

Japan in the 21st century is boiling with right-wing nationalism, as you may well know. Three years ago, when there was a major anti-Korean protest held by right-wing activists, I happened to hear “Chosenjin” [a derogatory word for Koreans] in the middle of Tokyo. Some of the fervent protesters went as far as yelling “Let’s kill Chosenjin!” It was as if I had traveled in time to centuries before. I was frustrated that the Japanese authorities were allowing such hate speech on the streets. That was when I realized the power mechanism in Japan.

Are you saying the Japanese authorities are linked with people in Kabukicho?

Well, the government is merely taking advantage of the area, depending on the political climate of the time. Kabukicho was not a red-light district from the start. After World War II, the government initially planned to build kabuki theaters there. But as time went by, the town evolved into the symbol of Japanese sexual culture. Throughout different governments, there have been attempts to clean up the streets, but they were not successful.

How did you start your career as a photographer? Did you study photography at university?

No. I studied urban planning and engineering, but toyed with photography by joining a club. Then, as I got older, I got confused about my future. In 1994, I flew to Japan just to forget everything. As my Japanese wasn’t fluent, I had to start learning the basics to go to Nippon Photography Institute, which is where I met my life mentor Kenji Higuchi. Mr. Higuchi showed me what it is to be a true photographer. He refused to be attached to any party and remains a real watchdog of society.

What is your most meaningful work, aside from your project in Kabukicho?

I cannot just pick one. During the past decade, I’ve covered some important issues for society, so I’ll tell you the most important ones.

In 2005, I spotlighted a “Saving Utoro” campaign in Kyoto. Koreans in Utoro were in a serious peril because the company that owned their land was trying to force them out, saying their community was an “illegal occupation.”

In May 2008, I also covered the Sichuan earthquake, and also photographed Japanese leprosy patients. But witnessing the earthquake in eastern Japan in 2011 was something that I can never forget in my life. To take vivid pictures of life after the disaster, I visited Fukushima four times. But when I returned home in Tokyo, I found myself shattered by survivor’s guilt.

Then a year later, I wanted to portray a vibrant part of Japan and open an exhibition in Shinjuku, so I celebrated the 10th anniversary of the rise of Korean Wave in Japan through pictures.