New Genesis drives off with Car of the Year award

New Genesis drives off with Car of the Year award 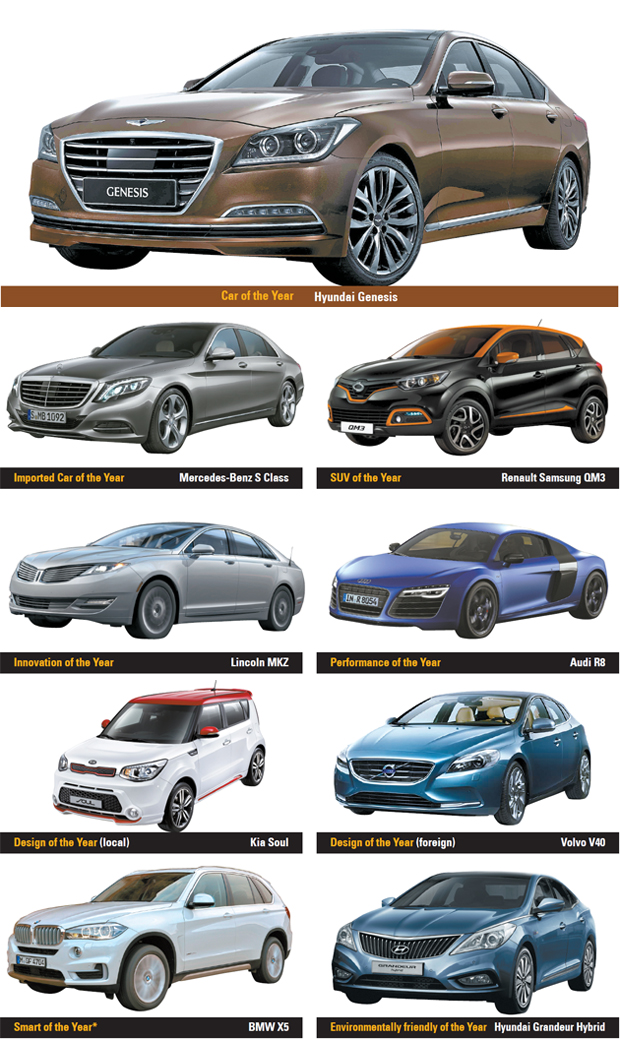 Hyundai Motor’s second-generation Genesis has been selected as the 2014 JoongAng Ilbo Car of the Year (COTY).

The premium sedan from Korea’s largest carmaker received high points from 17 experts in almost every category.

It is the first time a domestic car has claimed the top prize since Kia Motors’ K5 midsize sedan won in 2011.

The new Genesis, which Hyundai Motor Group Chairman Chung Mong-koo claimed is the car in which all of Hyundai Motor’s technological power is concentrated, was developed over two years at a cost of 500 billion won ($462 million).

It was targeted to compete with German premium brands, and judges were impressed by the driving experience of the new Genesis, as well as Hyundai’s bid to raise the level of Korean cars.

Meanwhile, the Mercedes-Benz S Class, the flagship sedan from the German automaker, was chosen as Imported Car of the Year. The award is given when the COTY goes to a domestic model.

The COTY office will host the award ceremony today at the Shilla Hotel in central Seoul. The event will also recognize winners in seven other categories: SUV, performance, environmental friendliness, domestic and import design, and innovation and smart, which evaluates the technology of convenience features.

The public had an opportunity to vote for the COTY online and at an exhibition of the 16 finalists at Kintex in Ilsan, Gyeonggi, from March 12 to 16. The COTY office said 70,000 people visited the exhibition. 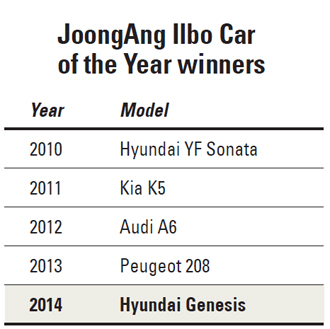 Meanwhile, JTBC, the broadcast channel of JoongAng Media Network, will air the COTY awards ceremony in its entirety late next month.

The 17 judges, each with more than 10 years of experience in auto-related fields, reviewed 46 cars introduced in Korea last year. After an initial screening that involved listening to automakers’ presentations and analyzing research data, the list was trimmed to 16 on Feb. 14.

The first screening process was intense from the beginning, as automakers’ representatives were busy presenting the strengths of their models and judges asked pointed questions. The session ended nearly an hour later than scheduled.

Next on the judges’ agenda was a test drive session on March 9 at the Korea Automobile Testing and Research Institute (Katri) track in Hwaseong, Gyeonggi, for final evaluations before submitting their decisions.

However the cars performed during the first stage, the 16 finalists started the second evaluation with a blank slate.

Although it was a cold day, the judges began their work early in the morning, inspecting the contenders from trunk to grille and everything in between.

They also drove each of the cars three or four times to test braking and cornering.

The history of COTY shows the prize doesn’t always go to the cars with the most powerful engines or biggest sales.

Instead, the winner must perform well in all areas, from price to performance to driver and passenger convenience.

For instance, last year’s winners in the performance category were the Porsche 911 and Toyota 86. In terms of engine specs and price, the Toyota 86 was not comparable to the Porsche 911, but judges gave high marks for the Toyota 86’s driving experience considering its cost.

The screening process is also supported by its unique point system, which prevents a small number of judges from influencing the outcome. This has resulted in neck-and-neck races for the COTY prize.

For example, in last year’s COTY awards, the difference between first and second place was only 0.4 point.

“In terms of professionalism and fairness of evaluation, the JoongAng Ilbo COTY has earned a status that cannot be compared to any others,” said Yoon Dae-sung, executive director of the Korea Automobile Importers and Distributors Association, who served as adviser to the COTY awards.

The model, which was released in Korea last November, received a perfect score of 100 points from nine of the 17 judges.

After the first screening, the Genesis was in a tight race with two imports. But in test drives during the second session, the Genesis received 82.4 points to pull away from competitors by more than 30 points.

“The Genesis showed significant improvement in both its suspension and body structure, which have been weak points of Hyundai Motor cars,” said Judge Lee Nam-seok, a business administration professor at ChungAng University.

While the original Genesis was the first rear-wheel drive vehicle by Hyundai, the second-generation Genesis offers optional four-wheel drive. The car can produce 315 horsepower with 40.5 kilogram-meters of torque.

Hyundai said the use of high tensile steel in 51.5 percent of the body improved the safety and strength of the car, but judges were disappointed in the new Genesis’ fuel efficiency of 9.4 kilometers per liter (22.1 miles per gallon), which is worse than the previous version.

“In almost every respect, the discrepancy between Hyundai Motor and foreign automakers is narrowing significantly,” said Judge Yu Ji-soo, president of Kookmin University. “However, in order to overcome the ‘2 percent’ difference to become truly premium, Hyundai needs to reinforce its identity.”

Mercedes-Benz’s S Class, the Imported Car of the Year, was praised as setting new standards for luxury sedans. The latest S Class, which received its first full makeover in eight years, was introduced in Korea last November by Daimler AG Chairman Dieter Zetsche.

Judges also gave the flagship German sedan high marks for its “magic body control,” which uses a sensor to scan the road surface ahead and adjust the car’s suspension accordingly. The new S Class also delivers 13 percent better fuel efficiency than its predecessor.

The best sport-utility vehicle (SUV) award went to the QM3, which is made in Spain by Renault Samsung Motors. The small SUV was praised for its affordable price - 22.5 million won to 24.5 million won.

Judges also evaluated the QM3 highly for its practicality, colorful design and fuel efficiency of 18.5 kilometers per liter.

Lincoln, the luxury brand from Ford, managed to claim this year’s innovation award with a unique interior design highlighted by a push-button gear selector arranged vertically on the dashboard.

The Audi R8 V10 claimed the performance award. The German automaker released the R8 V10 Plus model last year with a 5.2-liter V10 engine that produces 550 horsepower and goes from zero to 100 kilometers per hour (62.1 miles per hour) in 3.5 seconds. Judges also gave the R8 V10 points for being a high-end sports car that is easy to drive.

The new Soul, which received a full makeover for the first time in five years, was acclaimed for upgrading its design from the previous model and carrying through with the automaker’s design theme. Kia said during its release in October that it wants to compete head to head with the Mini Cooper.

The new Soul also won an International Forum Design prize and a Red Dot Design Award, which are considered to be two of the top three design prizes in the world.

The Volvo V40, best known for being equipped with pedestrian airbags below the hood, was praised for its clean design and interior details. Judges said the model best represents Volvo’s efforts to make a more family-friendly car, while maintaining its well-deserved reputation for safety.

The smart prize went to the BMW X5. This category was inaugurated this year to focus on evaluation of electronic devices and conveniences in response to the rise of technology in automobiles. The third-generation X5 was highlighted by its “iDrive” user interface equipped with a touch pad that can recognize Korean letters, while its high-definition LCD screen mounted in the dashboard also impressed judges.

Among this year’s 16 finalists, six were from Korean automakers, double compared to last year when only three made the list.

Judges noticed that Korean cars have made lot of improvement, but at the same time some said there is more to be done.

“As I test drove the various cars, I got a feeling that there is starting to be a clear divide between the winners and losers in the auto industry,” said judge Hwang Soon-ha, the UL Korea CEO who previously worked for Kia and Daewoo. “Although I think Hyundai Motor is on the winners’ side, the Genesis is bit disappointing to be called the car into which Hyundai put all of its effort.”

Heo Seung-jin, who is the dean of Kookmin University’s Graduate School of Automotive Engineering and participated as a COTY judge for the first time, said: “In the end, what’s important for the automaker is to make a car that is easy to drive and ride in, while returning to the basics.”