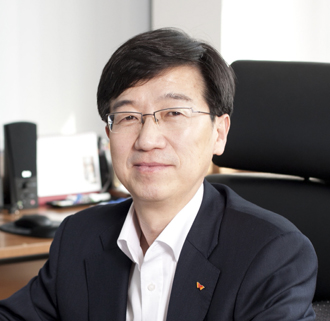 Can SK Hynix survive without its former chairman, Chey Tae-won, at the helm of the chip maker?

Chey stepped down from the directorship of the company following the Supreme Court’s conviction of the 53-year-old chairman last month for embezzling 45.1 billion won ($41.9 million) in corporate funds.

That leaves Park Sung-wook as the sole CEO of SK Hynix, which has emerged as the backbone of the country’s third-largest conglomerate.

SK Hynix earned 3.38 trillion won in operating profit last year, the best performance among SK affiliates. The world’s second-largest maker of memory chips pulled it off despite a significant disruption to its production capacity caused by a fire at its Chinese factory in September.

It is a quicker-than-expected soft landing for Hynix, which was the source of both pride and embarrassment for its owners.

Born as Hyundai Electronics in 1983, the company - as well as Samsung Electronics - contributed to Korea’s rise as the world’s leading semiconductor factory.

It merged with LG Semiconductor in 1999 under a government policy that encouraged mergers of similar industries, but a liquidity crisis stemming from the merger and the dissolution of Hyundai Group left Hynix in the hands of its creditors in 2001.

Creditors were twice unsuccessful in attempts to sell the company, which changed its name to Hynix Semiconductor in 2001.

Things turned out well for Hynix under the umbrella of SK, as the group, formerly focused on domestic businesses such as energy, mobile service, and construction, has been aiming to expand globally.

The aggressive investment bore fruit quickly and Hynix made a net profit of 2.9 trillion won last year, the most in its 30-year history.

Park, a lifelong Hynix man who rose through key posts including the head of the company’s U.S. business and R&D center, is confident the company will continue its bullish run despite the absence of Chey.


“The semiconductor market sees a constant change in demand and supply, so this year is also expected to have much uncertainty,” Park said at a shareholders meeting on Friday.

But, he added, “we will reach our goal this year and enter a virtuous cycle in which we create a sustainable economic value” based on last year’s performance.

Hynix’s solid performance last year was thanks in part to an increase in the price of dynamic random access memory (DRAM), but many analysts predict it will fall this year.

Hynix, which currently focuses on DRAM and NAND flash memory, is trying to secure capacity in non-memory chip areas and turn into an all-encompassing semiconductor company, Park said.

The company also faces a separate legal suit by its competitors and partners, Toshiba and SanDisk, over alleged theft of data regarding memory chip manufacturing technologies.

Park declined to comment, saying he has yet to receive the litigation and needed to grasp the situation.

Lee Sun-tae, an analyst at NH Investment and Securities, expected neither the leadership change at SK Hynix nor the litigation to have a significant effect on the company’s business.

He maintained a buy opinion for the company’s stock, suggesting 45,000 won as its target price for this year. It closed up 2.1 percent yesterday at 38,400 won.

“The memory chip business will continue to boom throughout 2015,” Lee said.