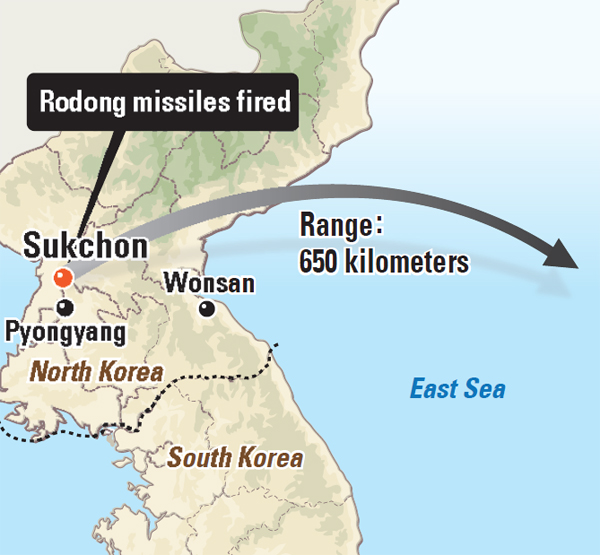 North Korea yesterday fired two mid-range ballistic missiles toward international waters off its east coast, the South Korean military said, apparently replying to demands from a three-way meeting in The Hague among the leaders of South Korea, Japan and the United States for it to denuclearize.

The launch also came on the fourth anniversary of the sinking of South Korea’s Cheonan warship, which a group of international investigators and Seoul blamed on Pyongyang, and which Pyongyang denied being involved in.

Two ballistic projectiles blasted off from a launch site in Sukchon County, north of Pyongyang, at 2:35 a.m. and 2:45 a.m. yesterday, respectively, South Korea’s Joint Chiefs of Staff said in a statement yesterday. They flew about 650 kilometers (403 miles) from the launch site, splashing down in international waters in the East Sea, the Southern military said.

South Korea’s Defense Ministry spokesman Kim Min-seok said at a briefing that the projectiles appear to be the Rodong missile, a medium-range ballistic missile with a range of about 1,300 kilometers.

The assumption was based on the military’s analysis of the missiles’ trajectory, Kim said. They reached about 160 kilometers above the earth and a maximum speed of Mach 7.

“The Rodong missile is dangerous,” Kim said. “It can strike most of Japan’s territory, some of the Chinese mainland and Russia.

“As it can be mounted on a mobile launch pad, North Korean can launch it wherever they want,” he said. “The fuel can be injected in an underground facility, so it’s hard to detect.”

According to the South Korean military, it has been about five years since North Korea launched a Rodong missile. The most recent one was in July 2009.

The launch came just five minutes after South Korean President Park Geun-hye started a trilateral meeting with U.S. President Barack Obama and Japanese Prime Minister Shinzo Abe at 2:30 a.m., Korean time. The meeting was held on the sidelines of the Nuclear Security Summit in The Hague.

The three allies agreed on the need for more efforts for the nuclear disarmament of North Korea.

The Defense Ministry spokesman said the test-firing in the early morning was also part of Pyongyang’s saber-rattling amid ongoing Seoul-Washington joint military drills.

Pyongyang has protested the annual military drills between the allies that continue through mid-April, calling them “a war rehearsal against the North.”

“They apparently intended to demonstrate their missile capabilities and attract the international community’s attention by firing off the missiles right after the South Korea-U.S.-Japan talks began and in response to the ongoing Foal Eagle drills,” Kim said.

North Korea has test-fired various kinds of rockets and missiles - about 80 short-range FROG rockets and some Scud-type missiles - since the two allies began the military exercises in February.

Unlike those short-range rockets, Seoul and Washington both said that yesterday’s launch of mid-range missiles was “a violation of UN Security Council [UNSC] resolutions” that forbid North Korea from using ballistic missile technology.

“It was a surprise action without prior notice to vessels in the region and a provocative act that poses a grave threat to the safety of civilians and international navigation orders,” South Korea’s Foreign Ministry said in a statement yesterday. “Particularly, this launch is an act of provocation that ignored the UNSC resolutions and raised tensions in the Northeast Asian region, while the leaders from various countries emphasized the necessity of North Korea’s abandoning its nuclear weapons at the Nuclear Security Summit.”

“The leader of South Korea came onto the international stage and put on a ludicrous show as if she was an advocate of unification,” the statement said.

Pyongyang’s criticism of Park yesterday was the first since both Koreas agreed to stop publicly denouncing their leaders at high-level official talks on Feb. 14 in the border village of Panmunjom.

The committee added in the statement that South Korea’s military fired artillery near its five front-line islands in the Yellow Sea and floated propaganda leaflets criticizing North Korean leader Kim Jong-un on Monday.

South Korea’s Defense Ministry denied the report and explained that a civic group launched a leaflet campaign on Baengnyeong Island, not the military.

The launch of the missiles coincided with the fourth anniversary of the sinking of South Korea’s Cheonan warship on the night of March 26, 2010, which killed 46 sailors.

North Korea’s National Defense Commission, chaired by Kim Jong-un, claimed yesterday in a statement that the sinking was not related to the regime and asked Seoul to accept its own investigators to figure out the truth. A group of international investigators concluded that the warship was torpedoed by North Korea.