Grim outlook for those without welfare option

Grim outlook for those without welfare option 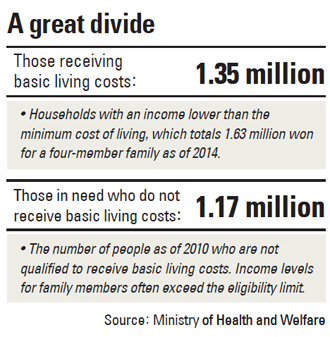 In late February, the circumstances surrounding the death of a 61-year-old woman and her two daughters at their home in Songpa District caught the media’s attention.

The three women had been having financial difficulties for years, authorities acknowledged at the time, and those problems were only exacerbated after the mother, identified only by her surname Park, injured her arm and was no longer able to work. The family was not receiving government welfare, they added.

This month alone, five back-to-back suicides reported by the press have all had tragically similar storylines, illustrating what seems to be a disturbing trend. In all six instances, economic hardship and illness or injury were common denominators, while poverty appeared to play a key role in the victims’ decisions to take their own lives.

Among the five cases in March, only one person received basic welfare benefits.

Yet despite the 106 trillion won ($98 billion) the government pours into the national welfare system, many people still manage to fall through the cracks.

The number of those who were not receiving government assistance but were still living in abject poverty stood at 1.17 million as of 2010, mostly because the income of the people obliged to support them - in many cases, their children - was higher than the limit for eligibility, according to the Ministry of Health and Welfare.

“When sick individuals are left to take care of themselves and the cost of treatment increases, those in the lower class tend to give up,” said Choi Myung-min, a professor in the social welfare department at Baekseok University, who led a psychological evaluation into 25 suicide cases in 2012.

In 11 of those incidents, the victims were in the low-income bracket, while eight out of those 11 took their own lives primarily because of illness, authorities believe. Of those eight, only one received basic welfare assistance.

Poverty and a lack of resources or support also led to an increase in crimes committed, according to the Korea Institute for Health and Social Affairs (Kihasa).

Last November, when researchers at the think tank analyzed 20 suicide cases and crimes committed over the past three years of people in dire circumstances, they concluded that 17 of those incidents were motivated by financial difficulties, derived from illnesses or physical disabilities either innate or acquired.

They also discovered that when those who were ill or disabled received little or no support from other family members, they were more likely to take their own lives or turn to illegal activities.

When JoongAng Ilbo reporters accompanied a medical team from the Seoul Bukbu Hospital on March 10 to meet Kim Yang-su, a 53-year-old alcoholic living in Jungnang District, central Seoul, they were led around a number of narrow alleyways in an impoverished neighborhood before locating his residence.

Kim’s home was just a 16.5-square-meter (19.7-square-yard) room. His face, hollow and gaunt, made him appear at least a decade older.

Kim previously worked as a daily laborer at construction sites, but after hurting his leg two years ago, he was ousted from his job. Because manual labor was his main line of work, he had difficulty finding another job and eventually turned to alcohol.

After that, Kim’s life took a downward turn, to the point where he could no longer afford to pay his 270,000 won monthly rent. His wife left him, and his 19-year-old daughter was forced to drop out of school.

Eventually, one of his daughter’s teachers stepped in and asked the district office whether the authorities could help Kim’s family. But because authorities could not reach his estranged wife, he couldn’t qualify for welfare benefits.

Kim recently heard that she froze to death earlier this year. After her death, the district office attempted to check his daughter’s status, but by that time Kim had also lost touch with her.

When the medical team visited Kim’s house, they immediately took him to a hospital and started him in an alcohol treatment program. Had no one reached out, he would have likely been left neglected, authorities said.

“Illness [or disease] is what mainly drives those who cannot receive welfare benefits over the edge,” said Kim Mi-gon, one of the Kihasa researchers. “There should be a program that identifies those in need and finds adequate assistance for them.”