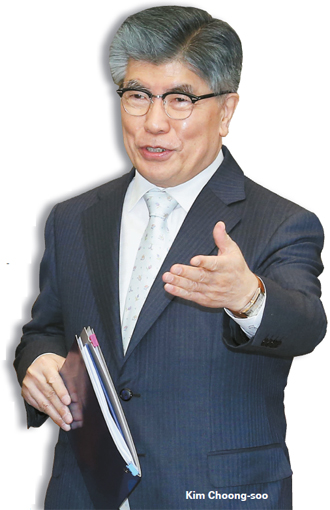 Outgoing Bank of Korea governor, Kim Choong-soo, said he has never been popular at any organization that he led.

“This is the ninth organization that I have headed,” Kim said late Wednesday when he met with journalists at the Bank of Korea. “But I was always criticized and was the subject of jealousy, and have never been a person who was complemented.”

He said it would have been nice to be the kind of boss who could satisfy all his employees, but it was something he never even tried to do - not because he didn’t want to but because he had a job to do.

“I would set a goal and do my best to achieve it,” Kim said. “I never hesitated or looked around and headed straight forward [to achieve the goal].”

The final day of Kim’s four-year tenure as head of the central bank is Monday.

The outgoing governor said although his decisions have not always pleased everyone, he has no regrets for the decisions he made, including monetary policy decisions like the one he made last May.

Last year, the market and the government expected the central bank to support the Park Geun-hye administration’s desire to stimulate the economy by lowering the key interest rate in April.

However, Kim unexpectedly held the key rate at 2.75 percent that month and shaved off 0.25 percentage point in May.

“Because monetary policy decisions are made with a mid- to long-term view, it is not very important whether it is April or May,” he said. “In April, the [government’s] supplementary budget had not passed the National Assembly.”

Kim stressed that he was not influenced by outside factors when making monetary policy decisions.

“There were zero outside influences or pressures,” Kim said. “Please tell me if there is anyone who can tell me what to do with interest rates in this country.”

For the many times he maintained the key rate, he was given the nickname “donggyeul Joong-soo,” which translates to “frozen Joong-soo.”

He was also often criticized for missing the timing in his monetary policy decisions and for not communicating with the market.

“Although one could evaluate whether the interest rate is either too high or too low, it is not appropriate to say [the central bank] is making changes [on the key interest rate] without any reasons,” Kim said. “That is something I can’t accept.”

The governor said that during his four-year term he has tried to make a difference in the organization.

One of the changes he is proud of is increasing the central bank’s overseas network and cooperation with global institutions and organizations.

“The Bank of Korea’s recognition in the global community has improved,” Kim said. “There are a lot of people who tell me the Bank of Korea’s standing in the international finance arena has been raised a level.”

In fact, BOK employees that are working in other central banks or international organizations have increased from five in 2009 to 13 as of the end of 2013.

Joint studies with research institutes at home and abroad have gone up from 1 in 2010 to 65.

Another noticeable change during his term was the crack in the ceiling, as Suh Young-kyung became the first female deputy governor.

The governor said his biggest achievement was the 2011 reform of the law that strengthened the BOK’s oversight function.

It was also the one area that he wished he could have done more in.

“After the central bank reform bill was passed, a macro-soundness analyzing department was formed and the financial stability report [presented to lawmakers twice every year] has been accepted, which is a huge change,” Kim said.

But he also added that the central bank law should be reformed once more to strengthen its role in stabilizing the financial market.

The outgoing governor said he is lucky he is leaving his job at a time when the economy is improving.

The central bank projected that growth of the Korean economy would be 3.8 percent by the end of the year. On Wednesday, it raised last year’s GDP growth from the previous 2.8 percent to 3 percent.