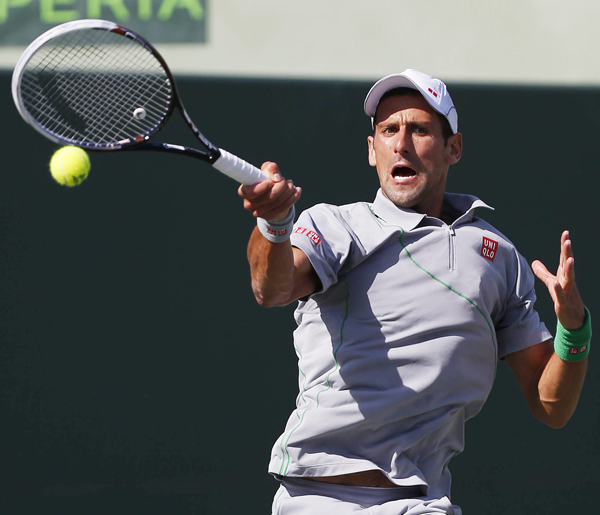 Novak Djokovic hits a forehand on day 10 of the Sony Open at the Crandon Park Tennis Center in Miami on Wednesday. [USA TODAY/NEWS1]

Novak Djokovic benefited from an erroneous call and claimed he didn’t realize he had broken the rules. When Andy Murray walked to the net and challenged him about it, Djokovic responded with a shrug and a sheepish smile.

Murray lost the dispute, and the match. The pivotal ruling against the defending champion helped Djokovic win 7-5, 6-3 in the quarterfinals of the Sony Open.

The point in question occurred at the start of the 12th game, with Murray serving at 5-6. Djokovic charged forward to volley a short ball and hit it for a winner.

Murray argued - and TV replays confirmed - he should have be awarded the point because Djokovic’s racket was on the far side of the net when he hit the ball. Chair umpire Damian Steiner declined to change his call, and such rulings can’t be appealed for video review.

An irritated Murray briefly discussed the matter with Djokovic.

“I went and asked Novak, and he told me he was over the net,’’ Murray said.

“Look, it might be my mistake,’’ Djokovic said. “I think I crossed the net with the racket. I didn’t touch the net. Maybe the rule is that you are not allowed to pass on his side with the racket. I’m not sure. You tell me.’’

That is indeed the rule. Djokovic said that if he had understood it correctly, he would have conceded the point.

A flustered Murray committed unforced backhand errors on the next three points to lose the game and the set.

“Obviously, that distracted him mentally, and after that he gave the set away,’’ Djokovic said.

Murray took a lead in the second set but lost the final four games and the last 12 points. Afterward, he downplayed the bad call.

“I’m not angry,’’ he said. “It maybe had a slight bearing on that game, but I was still up a break in the second set.’’

Djokovic, bidding for his fourth Key Biscayne title, will play Friday against the winner of the match Wednesday night between Roger Federer and Kei Nishikori.

Li Na became the first Chinese woman to reach the Key Biscayne semifinals when she beat Caroline Wozniacki 7-5, 7-5. Li’s opponent Thursday night will be Dominika Cibulkova, who erased three match points in the second set - one when a call was overturned via replay - and beat Agnieszka Radwanska 3-6, 7-6 (5), 6-3.