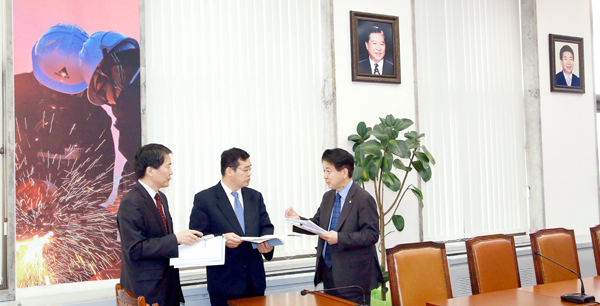 Photos of former presidents Kim Dae-jung and Roh Moo-hyun hang side by side on the wall in the New Politics Alliance for Democracy’s conference room. To the left hangs photo of a laborer with a placard attached above (not shown) that reads “industrialization.” By Kim Kyung-bin

The new opposition coalition yesterday proposed its first set of bills on welfare in a move signaling its readiness to make good on its promise to enhance the public’s livelihood and put an end to political squabbling.

During the party’s first leadership meeting yesterday at the National Assembly, NPAD’s co-Chairman Kim Han-gill remarked that the new party must put the welfare of Korea’s citizens first, proposing the new bills to extend the scope of government-provided basic living subsidies.

“New politics is the kind of politics that prioritizes enhancing the livelihoods of people,” Kim said during the meeting. “Today, we submit the party’s first bill, a so-called ‘mother and two daughters’ bill to extend welfare coverage for those in need.”

The idea of bolstering the social safety net gained momentum following a widely reported suicide case last month in which a 61-year-old woman and her two daughters, both in their 30s, committed suicide by burning a charcoal briquette in their sealed-off rental home in Songpa District.

The suicides were likely motivated by financial difficulties, authorities said at the time, adding that the family did not receive basic living subsidies.

The woman, only identified by the surname Park, and her daughters left behind 700,000 won ($653) in an envelope with a note apologizing to the landlord. The case sparked a wave of public sympathy and increased calls for the government to overhaul the national welfare system.

“A string of suicides by those in poverty in recent months is the result of a weak social safety net,” the NPAD said yesterday in a statement, adding that the number of those receiving basic welfare decreased to 1.35 million last year from 1.55 million in 2007.

One of the three bills proposed by co-Chairman Ahn yesterday aims to extend the scope of basic subsidies to those in need by excluding spouses as obligatory supporters in family groups when verifying welfare eligibility. Children, parents and spouses are currently classified as mandatory caregivers for potential recipients, regardless if he or she is estranged from those family members. Under the current law, a four-member household that makes a monthly income of 1.63 million won per month or less is eligible for basic support subsidies.

The second bill, proposed by co-Chairman Kim, seeks to empower district chiefs to select those most in need to provide emergency support. And the third bill, submitted by Representative Choi Dong-ic, aims to identify households in need of government assistance that have failed to pay water, electricity and health insurance fees.

In the NPAD’s conference room at the Assembly, framed photographs of former presidents Kim Dae-jung and Roh Moo-hyun were hung side by side on the wall, a sign that the new party will uphold its position as an official successor to the two liberal administrations that governed from 1998 to 2008.