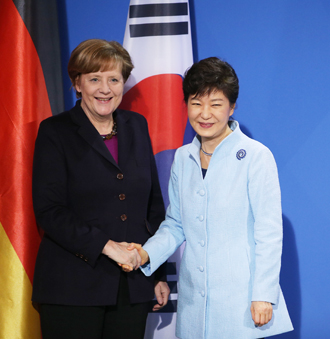 BERLIN - President Park Geun-hye and German Chancellor Angela Merkel, friends for 14 years, reaffirmed their personal and diplomatic ties in a summit Wednesday night, and the German leader said her country’s experience of reunification after division has lessons for the Korean Peninsula.

German President Joachim Gauck also showed immense interest in the potential of a united Korean Peninsula and vowed to provide support in a separate summit earlier in the day.

The unification of Germany was a glucksfall, Merkel said, a windfall or stroke of luck, in a deliberate echo of Park’s comment at the beginning of the year that Korean unification would be a “bonanza.”

“Korea and Germany have a special fellowship as the two countries shared the painful experience of national division during the Cold War,” Park said in a press conference after the summit in the presence of some 100 reporters. “In that Germany has already achieved reunification and further social unity, Germany is a role model to us for a peaceful reunification of Korea.”

One of a flurry of agreements made between the two leaders will establish a network among financial authorities and economic policy think tanks so that Germany can share its experience of economic unification and the funding of unification. The leaders also said they would establish unification and diplomatic policy advisory committees between the foreign ministries of the two countries.

“Germany was divided for 40 years, and Korea has been divided for almost 70 years,” said Merkel. “I think it is our obligation to help South Korea achieve unification.”

Park, in return, said trust and support from allies is crucial and expressed her appreciation for Germany’s support.

On the sidelines of Park’s state visit, a forum devoted to starting a network of “hidden champions,” referring to SMEs, was held Thursday morning. A total of 105 Korean enterprises accompanied the president on her German trip, and 71 of them are small and midsize companies.

The Park-Merkel summit marked the two leaders’ fifth encounter. The last time they met was at a G-20 summit in St. Petersburg in September.

Their friendship dates back to October 2000, when Park, as deputy president of the Grand National Party, the ancestor of the Saenuri Party, met with Merkel, then secretary general of the Christian Democratic Union, the country’s second-largest party, in Germany.

Park told Korean reporters after another meeting with Merkel in 2006, after she had stepped down as GNP leader, that her diplomatic and economic policies, as well as her dedication to principles and trust, were similar to Merkel’s.

The two have a lot in common. Both are the first female leaders of their countries, who started their political career in conservative opposition parties. They also have similar education backgrounds: Park studied electronic engineering at university, and Merkel majored in physics.

And, of course, they both grew up in divided homelands. A native of Hamburg, which formerly belonged to West Germany, Merkel migrated to East Germany with her clergyman father while the two countries were still divided.

Earlier Wednesday, Park had a summit and a luncheon with German President Joachim Gauck. The Korean president expressed gratitude to Germany for employing thousands of miners and nurses decades ago, to which her German counterpart said his people have not forgotten those Koreans’ contribution to the German economy.

A former human rights activist under the East German regime and member of a Korea-Germany unification advisory committee before he took office as president in March 2012, Gauck said he would exert every effort to provide support for the unification of the two Koreas. Saying the unification of Germany would have gone through fewer trials and errors if West and East Germany had prepared for unification better, Gauck stressed he understands the importance of unification as an East German native.

Martin Hyun, a former ice hockey player and son of Korean immigrants in Germany, joined the presidents for the luncheon and posed for a photo while holding a uniform that read “Pyeongchang 2018,” referring to the Winter Olympics that Korea will host. Also attending the event were two Korean musicians who are studying in Germany. They played music as the luncheon was under way.

Following the luncheon, Park took a tour around Brandenburg Gate, the symbol of Germany’s unification, and the Berlin City Hall. She then laid flowers at a memorial for Germany’s war victims.

Thursday she is scheduled to begin the fifth day of her six-day itinerary in Europe with a visit to the DMZ-Grunes Band (Green Belt) photo exhibition in the East Side Gallery.

A joint project between Germany and Korea, the exhibition shows photographs taken in both the Grunes Band, which is similar to Korea’s DMZ.

Park will then tour a Siemens gas turbine factory in Berlin, which will wrap up her two-day stay in the capital. Cho Won-dong, senior presidential secretary for economic affairs, said in a briefing that Park chose Siemens for its historical resonance.

“Siemens hugely contributed to adding high value-added jobs over the course of German unification,” he said.

Park is then set to fly to Dresden, a nearby city that was part of East Germany, later in the afternoon to receive an honorary doctorate at the Technical University of Dresden, where she is expected to deliver a significant speech about the prospects for unification.