Tycoon’s hidden assets to be seized

Tycoon’s hidden assets to be seized 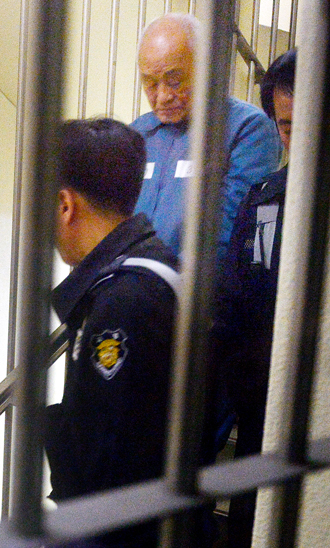 Huh Jae-ho, the former chairman of the now-defunct Daeju Group, is released from a prison labor house on Wednesday evening. [NEWSIS]

Prosecutors and tax authorities have begun full-fledged efforts to track down hidden assets held by Huh Jae-ho, the former chairman of the now-defunct Daeju Group, as part of a bid to levy the massive fine he owes.

The investigation into the elderly tycoon’s domestic and overseas assets comes on the heels of the Supreme Prosecutors’ Office decision on Wednesday to lift the sentence imposed on him, in which he would pay off his 25.4 billion won ($23.6 million) fine through work at a prison labor house.

The moves follow public uproar over a court’s lenient ruling four years ago that set the value of Huh’s daily labor at 500 million won per day - which would have allowed him to pay off his debts in less than two months.

To contain the growing criticism at how the court arrived at such a figure, the prosecutors released Huh from the prison house Wednesday evening to go after his hidden assets to pay the remainder of what he owed.

Since Huh spent five days there and one day at the prosecutors’ office in 2007 awaiting the court’s decision on whether to jail him on embezzlement and tax evasion charges, 3 billion won has been deducted from the 25.4 billion won fine.

“After thoroughly reviewing relevant laws on forced labor, we concluded it is legally feasible to stop an ongoing labor penalty,” the Supreme Prosecutors’ Office said in a statement.

Under Korean criminal law, terms at the prison labor house can be set anywhere between one day and three years. It is up to the individual court to set the cost of labor. For common inmates, a day’s work is set between 50,000 won and 100,000 won.

However, during Huh’s second trial, the court in Gwangju came up with a historic figure for a day’s labor, worth 5,000 to 10,000 times the normal rate.

The absurd ruling prompted uproar and raised suspicions that the judge who made the ruling had an inappropriate connection to Huh, who once managed the largest business group in South Jeolla.

According to the authorities, Huh registered his assets, which include real estate, using borrowed names - those of his distant relatives and even his mistress.

The Gwangju Regional Tax Office said yesterday that it had identified a 66,115-square-meter (16.3-acre) property in Gwangju, Gyeonggi, owned by the 72-year-old former chairman under a borrowed name.

It added that it will conduct a public auction for the land to pay off the former chaebol owner’s unpaid regional taxes, which amount to 13.6 billion won.

In the probe into Huh’s assets, conducted by a special 10-member investigation team formed by the National Tax Service, the authorities have so far identified 13 properties belonging to the former chairman that total nearly 50 billion won.

Authorities have also discovered that he ran a construction business based in Auckland, New Zealand, during his years living as a fugitive. Huh fled Korea while he was standing trial in 2010 to avoid paying the massive fine and personal debts. He had been living in New Zealand for four years until his return to Korea on Saturday.

It is estimated that Huh owns real estate in the foreign country worth 5 billion won. His son allegedly has a 100 percent stake in KNC Construction that the disgraced tycoon set up there.

Lee Doo-sik, a senior prosecutor at the Gwangju District Prosecutors’ Office leading the investigation, confirmed that authorities will file a lawsuit at a local court in New Zealand to begin the process of forcibly seizing Huh’s assets there.

The now-disbanded Daeju Group was once Korea’s 52nd-largest company by assets with 15 subsidiaries.