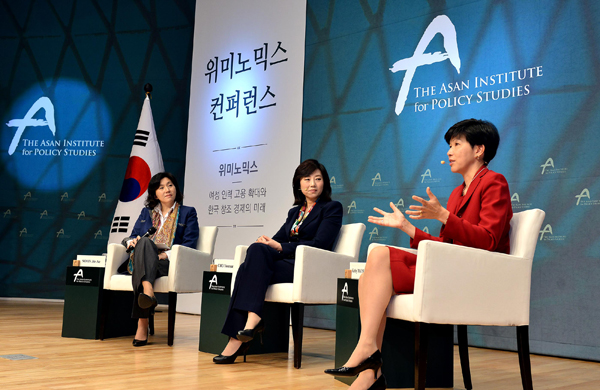 The main auditorium at the Asan Institute of Policy Studies’ building in Jongno, central Seoul, was crowded yesterday with a group of enthusiastic men and women from diverse business fields who were interested in an initiative to increase the participation of women in the labor market to boost economic growth.

This initiative - also referred to as “womenomics” - has received more attention over the past year under the country’s first female president than any previous administration.

Cho delivered the keynote speech at the Womenomics Conference hosted by the Asan Institute of Policy Studies, a local think tank, and Goldman Sachs.

“The 3-year economic innovation plan recently announced by the Korean government focuses on expanding an additional 1.5 million jobs for women,” the minister said. “In reality, there is no easy, one-size-fits-all solution to balancing work and family. As such, it is important to offer the broadest range of opportunities and support possible.”

Unlike other developed countries like Sweden, Denmark and the United Kingdom, figures show that labor discontinuity is more severe for Korean women, especially those in their 30s and 40s, meaning it is difficult for them to return to work after marriage, giving birth and raising a child.

“What our ministry and other ministries in the Korean government are doing to solve these problems is to enhance the retention rate of women by focusing on three elements - child care facilities, a flexible work system, and child care leave,” Cho said. “All three are related to the family-friendly culture of the company and incentives and systems that help work-life balance for employees.”

Cho added that creating a family-friendly culture, which in the end creates a better working environment for female employees, should be done from a top-down approach rather than a bottom-up approach.

“Rather than the bottom-up, the top-down is far more efficient,” she said, noting that changing the mind-set of company chief executives is important.

“Certifying companies that are engaged in family-friendly management is important,” Cho said.

She gave the example of SK Innovation, which is one of the companies that is certified as a family-friendly company by her ministry.

“I asked him why he believes in family-friendly management and he said, ‘All of large companies in Korea have done everything to improve their capability and increase outcome. There are very few things left that they can try.’?”

Meanwhile, along with Cho, the co-hosts invited Kathy Matsui, co-head of Macro Research in Asia at Goldman Sachs, to share her thoughts on so-called womenomics, an economic theory that she developed in 1999 referring to a concept that increasing female participation and preventing career discontinuity drive economic growth.

She personally gained interest in this field when she saw Japan facing a shrinking work force and a huge debt level around that time and thought of the importance of maximizing the number of women in the female work force by minimizing the discontinuity of their careers. Matsui proposed several measures to boost female participation: private and public sector expansion of affordable day care, nursing care facilities and services through deregulation and implementing immigration reforms to allow working women to outsource their responsibilities for child care and household chores.

“As for Korea, it has a vast pool of highly educated women,” she said. “This suggests the Korean government and private sector companies will gain an enormous competitive edge if more women join the work force.”