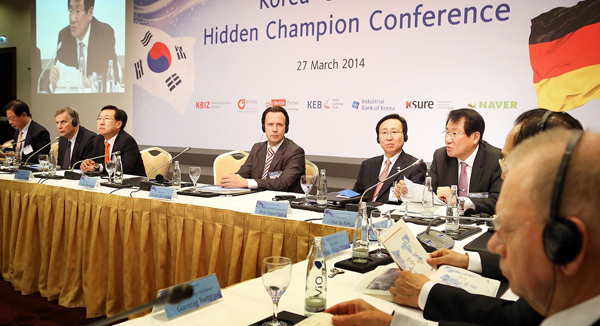 Korea Exchange Bank held a Korea-Germany hidden champion conference in Berlin on Thursday, local time, in hopes of encouraging small Korean businesses to learn about expanding to overseas from their German counterparts.

KEB was the only Korean bank in President Park Geun-hye’s business entourage, the company said yesterday.

The event was organized with the Korea Federation of Small and Medium Business, Korea Trade Insurance Corporation and German Association for Small and Medium-sized Businesses. Roughly 180 businessmen from both countries attended.

“Despite the global financial crisis, Germany still stands as the world’s No.1 in trade surplus,” said KEB President Kim Han-jo. “This is because there are solid small and midsize manufacturers and exporters. This is an important factor that Korea has to benchmark in the future.”

In 1970, KEB was the first Korean bank to open a branch in Frankfurt. The main purpose at the time was supporting Korean miners and nurses in Germany as guest laborers. After the two countries signed a labor recruitment agreement, the first 200 Korean miners went to work in the German coal mines. The number of miners rose to 8,000 by 1977.

Miners and nurses were only allowed to stay for only three years.