Deregulation boils down to 3 views

Deregulation boils down to 3 views 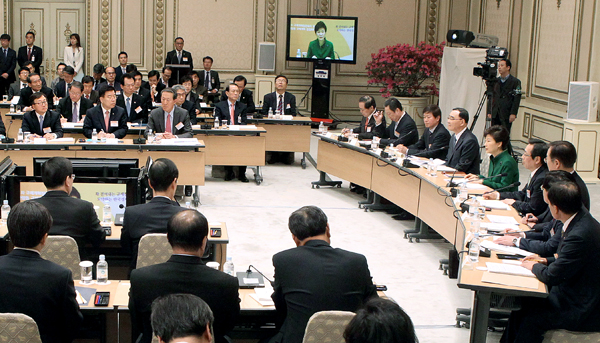 Since the Blue House meeting on deregulation on March 20, anyone who has anything to say about the issue wants to “frame” regulations. This highlights what the person wants to emphasize while intentionally omitting facts they would rather ignore. They want to focus on a certain side to redefine reality.

The debate on deregulation boils down to three major points of view.

The first is the “cancerous” view, advocated by President Park Geun-hye. At the Blue House senior secretaries meeting on March 10, she said that “the unnecessary regulations are enemies to fight against and cancer cells that should be removed.”

The third view is “prudence in deregulation.” The key here is to argue that necessary regulations should not be removed. It is similar to the government officials’ argument as it acknowledges there are some “good regulations.” But the difference is that this argument is mostly used by the socially weak, or those who advocate their interests. They want to be wary of branding certain regulations unnecessary. As the “cancerous” view gains influence, they are watching the groups that stigmatize regulations. They are especially wary of conglomerates, not the bureaucrats. They are vulnerable to getting exploited by the officials who want regulations. A good intention does not always lead to a good outcome.

The three views have a way of turning into a circle. The outcome of the deregulation war will depend on how they are connected. Different values lead to different stances. How you look at the correlations between the market and the government, competition and regulation, and efficiency and public interest will determine your perspective on regulation. I personally believe that these values are not contradictory or supplementary but that they are mutually cooperative.

There is no one correct answer. If we must present an answer, it would be, “Let’s have all frames compete in a public discussion and in a healthy manner.” Hopefully, anyone who has ears will listen to the debate on deregulation.

The author is a national news writer of the JoongAng Ilbo.