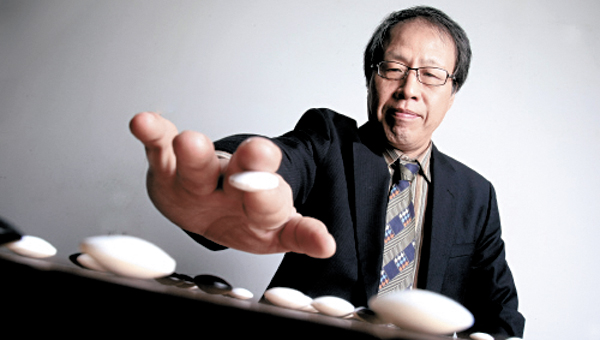 Park Chi-moon, a popular long-time baduk editor for the JoongAng Ilbo, recently stepped down from his position to begin a new chapter as the vice president and director of the Korea Baduk Association. [JoongAng Ilbo]

Park Chi-moon once wrote that the world could be divided two ways. There are things for which we contend, he said, and things which we do not.

“It is very understandable and also entertaining to have an outcome in the competition,” the popular baduk editor acknowledged in a column titled “The kind master does not exist,” which was published in the JoongAng Ilbo on July 19, 2010.

“However, I wish the things that make the world more beautiful, such as love, marriage, dance, music or education could stay out of this competition. It’s a big relief that we still mostly classify our lives into the latter category.”

Baduk, also known as Go, is a two-player strategy-based board game. Each person takes turns placing black and white stones on different points on the grid. The goal is for one player to overtake the other by commanding a larger area on the board. The player who occupies more of the “house” is deemed the winner.

Park, now 66, has written about baduk for years, offering commentary and bits of wisdom along the way. He was beloved by JoongAng Ilbo readers practically from the first day he started his Go column 22 years ago in 1992.

Park concluded his baduk series this month and is now beginning a new phase in his career, having been appointed as the director and full-time vice president of the Korea Baduk Association. He follows in the footsteps of Hong Seok-hyun, chairman of the JoongAng Ilbo and JTBC, who was inaugurated on Feb. 13 as the president of the Korea Baduk Association.

Park wrote a farewell column for his readers and baduk fans, which ran in the JoongAng Ilbo on March 17.

“It has been 40 years since I started writing these records in 1975,” he said. “Time flies .?.?. I hope to be of help to the baduk community, which is going through a difficult phase right now.”

With those remarks, he officially made his move to the Korea Baduk Association in Hongik-dong, Seongdong District, in central Seoul.

Park wrote baduk commentary for 40 years, starting in 1975 at the Chosun Ilbo newspaper, and then to the Segye Ilbo and the JoongAng Ilbo. His ability to philosophize on life lessons and link that wisdom to the game had an especially deep impact on his fans.

“The ability gap between the ranks is distinct,” he said in his column, “Living a life, ‘Chi su,’?” published in the JoongAng Ilbo on March 1, 2011. “It’s impossible for the lower rank to win the upper rank. For the lower rank to win, he needs more points before the game starts. This point is called ‘Chi su.’ .?.?. In other words, if life must be decided between the winner and the loser, ‘Chi su’ must be dealt to ensure a fair competition.”

In an interview on Sunday with the JoongAng Ilbo, Park further elaborated on his decision to retire his pen.

“There are a lot of life wisdoms in baduk,” he explained. “If there was none, I wouldn’t be able to write about it. I’m sorry to leave before writing about all of baduk’s good points.”

His favorite aspect of the board game, he admitted, it that it is a “game that asks you to do the best in that very moment.”

That is why it’s impossible to be good at baduk if you don’t think outside the box, he added.

Another aspect, Park noted, is its humanistic value. “We can’t win or lose our lives,” he said. “That’s why we become weak competitors once we’ve figured it out.”

Park’s initial interest in the board game was fostered in 1964, during his second year at Jeonju High School in North Jeolla. Following graduation, he was admitted to Seoul National University, where he majored in Korean literature.

While in school, he participated in a joint baduk league made up of Korean and Japanese students. His interest in the game took him overseas, where he competed in a number of amateur tournaments.

Asked why he didn’t become a professional, he answered, “Back then, public awareness about professional baduk players wasn’t like it is these days. It was an economically hard time for everyone.”

Park still has a tough road ahead, though, as Korea’s baduk community drastically needs an overhaul. Young baduk fans are all but gone, and professional contests are not as easy to establish as they used to be.

For the past decade, Korea was the best in the world, though that title has now been handed over to China, where baduk historically originated.

In 2009, Park wrote in one of his columns that the “highest level in baduk is to hear the sounds of the stone checkers and listen to their minds.”

Now, his next step will be to listen attentively to the sounds and minds in the baduk community and take them from there.